First and foremost, Local S6 was very apprehensive about entering the federal mediation process. President Donald Trump appointed Director of FMCS Richard Giacolone and Commissioner Martin Callaghan to run the mediation process. They proved to be valuable tools in pushing both parties to move in the right direction and get our members off the picket lines and back to work. General Dynamics Executive Vice President Robert Smith was present for the entire process, alongside Bath Iron Works President Dirk Lesko, which allowed Local S6 to engage in valuable dialogue.

This process was emotional, difficult, and frustrating for both parties. Being able to reach a tentative agreement to bring back to our membership that keeps our subcontracting language unchanged, continues to protect seniority, and attain a modest economic package is what we were able to do.

We believe this agreement gives BIW the tools they need to have, and the ability to respond to the unpredictability of their day to day needs. This was a testament to the power of collective bargaining and a strong educated unit that backed the Local S6 Negotiating Committee. Solidarity, hard work, and dedication gave us the ability to push forward in a seemingly unwinnable fight. We are proud of our members who stood strong.

The Local S6 Negotiating Committee unanimously endorses this proposal to bring back to the membership for a vote. Bath Iron Works is printing copies of the proposal and will be mailing it out ASAP, allowing everyone to read it and ask questions so you can accurately vote.

Local S6 would like to give a special thank you to IAMAW International President Robert Martinez Jr, General Vice President Bryan Bryant, and their staff, for the immense amount of support and effort given to Local S6 during this challenging process.

We will be using Ballot Point to vote once again. Everyone will be sent a new PIN number. We will provide the information as soon as it’s available. The Company and Union are finalizing details about the process for returning to work following the ratification vote, details of which will be released in the next coming days.

The following is a comparison from the Last Best Final = (LBF) and the new tentative agreement.

Schedule B Hours of Work

Another long night at the bargaining table resulted in some additional movement by both parties. There were three additional articles TA’d (tentative agreement) resulting in a total of eight since the beginning of the mediation process.

The FMCS mediation seems to be a decisive influence, resulting in one of our main issues coming to a positive outcome.

The Union Negotiating Committee is hopeful that the forward progress between the parties will continue, resulting in a fair contract, and bringing all of our members back to work.

This is an incredibly frustrating, challenging, and emotional process. We recognize the future of over 4400 of our brothers and sisters is in the balance. Our committee is dedicated to a resolution that benefits all.

Although we T.A.’ed (tentatively agreed) to three articles yesterday (good progress) negotiations appear to be breaking down as the bigger issues are being addressed. We will continue to stand strong and united as we work towards a fair collective bargaining agreement.

Both parties worked late last night and were able to come to an agreement on two articles. Collectively, we chose two articles both parties believed we could reasonably get through, and with assistance from the mediation team, we did. Those are Articles 3 and 17.

We are meeting again today in hopes of moving forward to a fair agreement.

We are at the commencement of our sixth week on strike against Bath Iron Works. Questions surrounding the mediation process have come from many of you. Please allow us to explain, Local S6 spoke with FMCS mediators twice last week regarding returning to the table to resume negotiations for a fair contract for all of our members of Local S6, the irreplaceable skilled production workers of BIW. The only response from BIWs spokesperson was the company “remains fully engaged in the mediation process” and “when that process calls for the parties to return to the bargaining table and resume negotiations, we are prepared to do so.”

The whole point of this process is to get both parties back to the table as soon as possible. This is typical BIW PR that doesn’t accurately depict the intent of the process or the actual progress made. The mediator is supposed to get us back to the table which we are clearly prepared to do. We are prepared with additional options, plans, and proposals for increased job security and schedule recuperation to assist BIW.

The Union already knows that BIW has brought subcontractors into the shipyard and there are plans for a number of additional ones to enter the gates and scab out our work for a predetermined amount of time. This only gives hold to the theory that BIW has no intention of going back to the negotiating table anytime soon because of the contractual agreements with the subcontracts they are now employing. There is a clear and growing understanding across this state and country for that matter, that BIW’s last, best, and final proposal forced the members of Local S6 on strike. BIW will stop at nothing to subcontract our work, trying to starve us out, in an attempt to get what they don’t need. If BIW put as much effort into working collaboratively with us as they do with subbing our work out and watering down our skill sets with low paying jobs offers, we would be one of the leading assets in the shipbuilding industry.

How can BIW go from a shipyard that would send our members all over the world to now a shipyard that needs our own work subbed out for the very same reason, SKILL. How could BIW have delivered more than 30 DDG-51 Destroyers on schedule and now we can’t. I’m sure the company can come up with a litany of excuses, but the Local S6 is only interested in a fix.

Below you will find some recent activity that’s been happening in the shipyard. The Local views this as more of the same unwarranted self-congratulatory behavior. The true workers of Local S6 accomplished the majority of these tasks and set up management and scabs to take credit for work order closure with no details of what actually took place. Lack of management skills somehow justifies more PR for BIW. We are of the opinion it is not worth the paper it’s printed on. Stay strong and stand united! 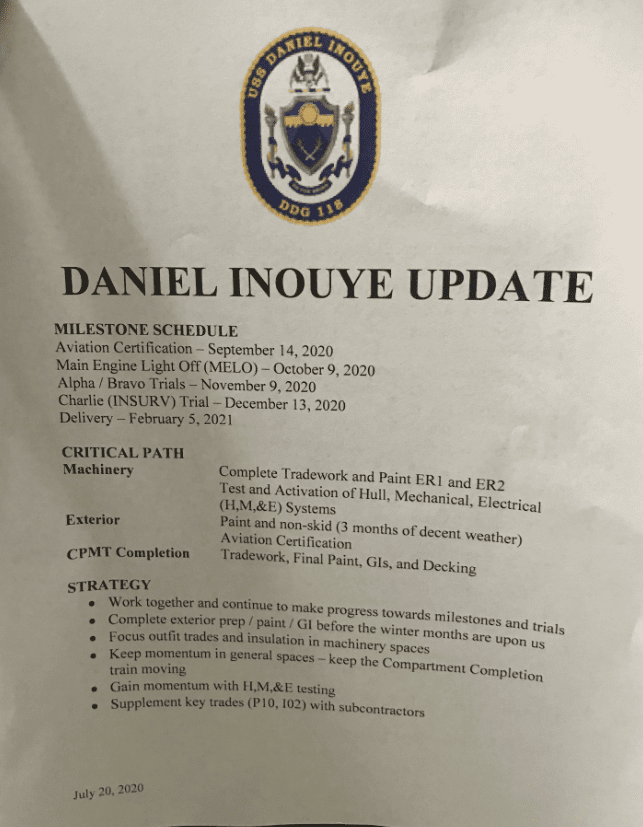 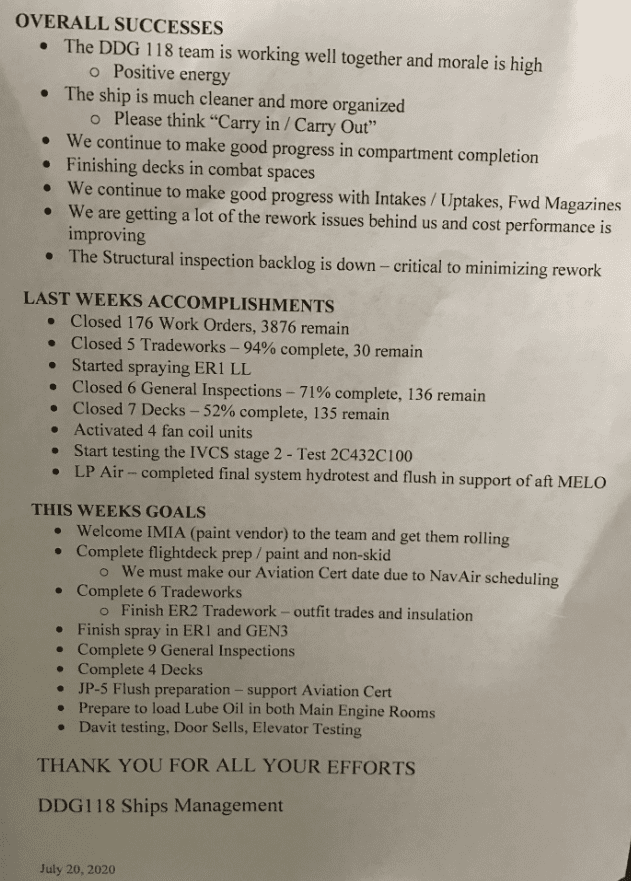