As We Give Thanks…

Sisters, Brothers and Friends of the IAM,

Thanksgiving is a wonderful opportunity to bring loved ones together, reflect on our blessings and express gratitude to others.

As fellow Machinists, I hope you will join me by thanking the thousands of our IAM Brothers and Sisters who are still on the job today and throughout this weekend.

IAM members working at airports, train stations and countless other locations are ensuring we get to our destinations safely. Additionally, IAM members at military bases across the country are working with the armed forces to keep us all safe as we celebrate the holiday with family and friends.

On behalf of the entire IAM Executive Council, I wish all of you a very happy Thanksgiving. For all of you who remain on the job this holiday weekend, we offer our deepest appreciation.

The post As We Give Thanks… appeared first on IAMAW .

The Machinists Union mourns the loss of Aerospace Coordinator Mark B. Johnson, 62, who passed away on Sunday, Nov. 24, 2019.

Johnson initiated into IAM Local 751-C in 1977 as a facilities maintenance mechanic for the Boeing Co. in Auburn, WA. He would go on to become a Business Representative and Organizer for District 751 in 2005, representing IAM members at Boeing’s plants in Renton and Auburn.

Johnson was appointed Aerospace Department Special Representative in February 2012, and was tapped to be Aerospace Coordinator later that year.

“I send my deepest sympathies on behalf of our Executive Council and the entire IAM to Brother Mark Johnson’s family during this difficult time,” said IAM International President Robert Martinez Jr. “For decades Mark served the IAM and its membership and remained dedicated and committed. He lived and breathed the IAM for his entire adult life, and we will always remember him.”

Funeral arrangements are still being finalized as of early Tuesday afternoon.

“Mark was a great asset to our union and an extremely close friend of mine for decades. His many years of experience proved invaluable to all who had the great honor of working with him,” said IAM Aerospace General Vice President Mark Blondin. “Our condolences go to Mark’s family as we honor him by never forgetting his countless contributions to the IAM and the labor movement.”

IAM International President Robert Martinez, Jr., is urging members of the U.S. Senate to sign on to a letter led by U.S. Sen. Gary Peters (D-MI)  aimed at undoing some of the damage done by President Trump’s executive orders attacking the rights of federal workers.

Peters led 43 of his colleagues in a letter requesting that Senate leadership and appropriations conferees include provisions to protect federal employees’ collective bargaining rights in any appropriations legislation Congress passes.

“The current administration has attacked federal workers’ collective bargaining rights with these imperious executive orders,” said Martinez. “These government employees have been condemned for expressing their voice on the job and have suffered through a nasty shutdown that left many of them financially stressed.”

“Furthermore, as the country’s largest unionized employer, the federal government sets the tone for labor-management relations across the country,” said Peters. “At a time when the right to unionize in both the public and private sector is increasingly under attack, we must affirm our support for worker and labor rights.” 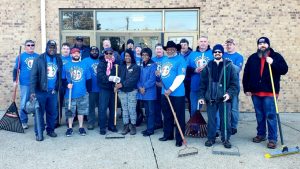 IAM District 837 recently helped a local church in need of a facelift in the St. Louis area.

Nearly 20 volunteers traveled from all over the District for the district’s first “IAM H.E.L.P.S. in the Community” event. The event took place at the Greater St. Mark Family Church in Ferguson, MO.

“The facility is 49 years old,” said IAM District 837 Directing Business Representative Earl Schuessler. “The congregation purchased the building 5-years ago and has struggled to make any improvements. It is well recognized in the community and needs our help. Thank you to all our members and families who came out.”

“Congratulations District 837 on a great event,” said IAM General Vice President Steve Galloway. “Greater St. Mark Church has been a focal point for rallies and raising awareness in Ferguson, as well as other marginalized communities. What a great way to give back to a pillar that does so much in the St. Louis area. IAM H.E.L.P.S. continues to leave an IAM footprint throughout local communities in the Midwest Territory.”

IAM H.E.L.P.S. stands for Honoring, Engaging, Lifting, Providing and Servicing. The Midwest Territory program is in its third year of service. For more on IAM H.E.L.P.S. click here .