Guide Dogs of America-Tender Loving Canines continues to advocate and serve Americans and service members in need. June 27 is National PTSD Awareness Day, to which GDA-TLC works to bring awareness to military veterans coping with PTSD.

With many IAM members serving in the armed forces, the Machinists Union will continue to be a driving force in securing assistance for veterans and their families. Tender Loving Canines and the PTSD Companion program is yet another way to support our service members when they return home.

Located in Sylmar, CA, the Guide Dogs of America-Tender Loving Canines training program costs the organization $60,000 to breed and train a PTSD Companion. Additionally, the program requires a 3-week online training program and a ten-day in-facility course to prepare veterans and their service companions.

To learn more about the program and how you can donate, help raise a puppy and advocate for veterans needing a PTSD companion, you can visit the Guide Dogs of America – Tender Loving Canines website here .

The National Labor Relations Board recently certified the union election win for over 100 Apple store employees in Towson, Md. The Coalition of Organized Retail Employees (CORE) overwhelmingly voted to join the International Association of Machinists and Aerospace Workers (IAM) .

READ: Biden says he is proud of Apple workers who voted to join a union (Reuters)

READ: Apple Workers at Maryland Store Vote to Unionize, a First in the U.S. (The New York Times)

READ: Maryland Apple store votes to unionize in first for company’s US locations (The Hill)

Machinists Union tweets thanks to Biden

WATCH: Why Apple Workers in Maryland are Organizing with the Machinists Union

With the upcoming Article 51 vote, we wish to ensure you are fully educated and supportive. As such, Stewards will be out and about redistributing educational material and handing out free stickers (see below). If you’d like a sticker or more information please reach out to your shop steward. 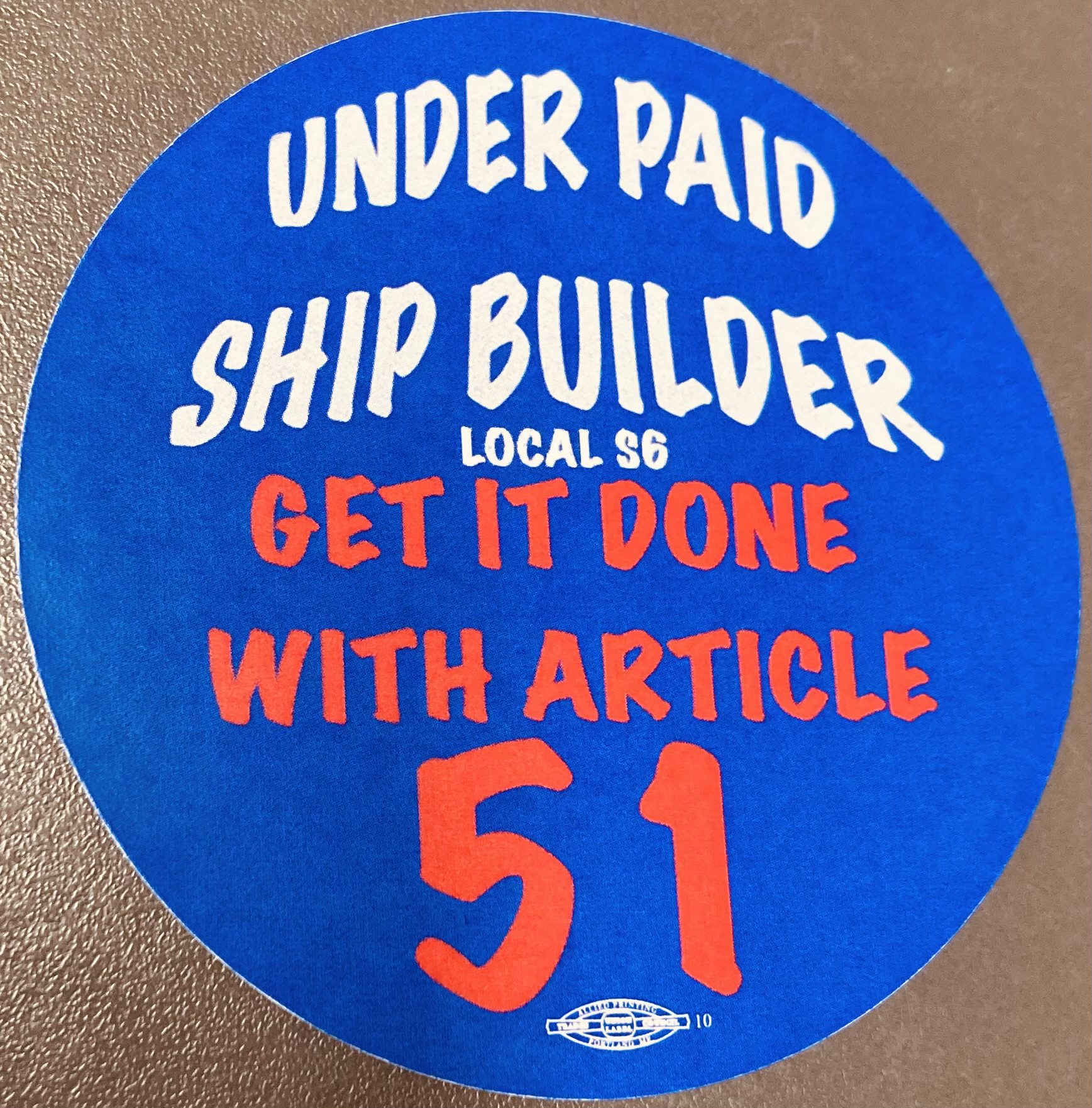 Machinists Local Lodge 350 members employed at Spirit AeroSystems in Kinston, NC ratified a new 5-year deal recently. The new accord also features a combined cash, and stock signing bonus for a total of $9,000 bonuses in retirement and cash.

The membership voted overwhelmingly to accept the new five-year deal, which includes:

The deal also features a new company match to 401(k) and increased IAM National Pension Fund (IAMNPF) from 75 cents to 90 cents over the life of the agreement. Health savings account participants will see a $100 increase on the start of each year of the agreement, while holding the line on health care benefits. The package also includes paid paternity and maternity leave, the first of its kind to be included in a collective bargaining agreement at Spirit AeroSystems in the U.S.

“Congratulations to the members and representatives of Local 350,” said IAM Southern Territory General Vice President Rickey Wallace. “My thanks go out to Grand Lodge Representative Joe Greaser, and the Negotiating Committee for a job well done – the proof is in the results.”

“My thanks to the membership,” said Grand Lodge Representative Joe Greaser. “Their quality of work along with a long partnership with management made it possible to make the gains the members wanted at the table.”

Please find the most recent Leadership Connection regarding 50/50 raffles and the Community Services Committee.