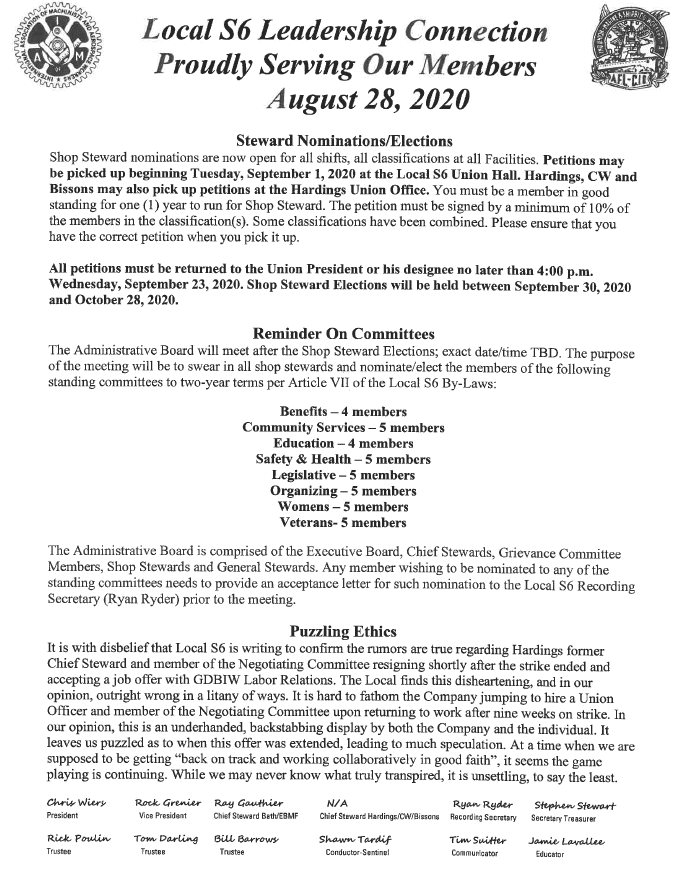 November 3, 2020 is Election Day, and as Americans it’s our civic duty to take part in our democracy by voting for who we want to serve in our government.

The IAM has compiled all the voting information you may need in one place at IAM2020.org .

You can register to vote, apply for an absentee ballot, set an election reminder and pledge to vote. You can even read what issues Machinists Union members are focusing on this election.

Visit IAM2020.org for the Machinists Union one stop shop for the 2020 election.

The IAM will celebrate the 70th anniversary of its “Boomer Jones” radio show from 1950, by airing and streaming nationwide an encore performance on WCPT 820  in Chicago. The program features Hollywood stars William Holden, Marie MacDonald and Brian Donlevy, with commentary before and after from labor historian Charlie Micallef and Tanya Hutchins.

Boomer Jones tells the story of union organizing, through the eyes of a machinist who learns the trade as an apprentice and later becomes a journeyman. The drama shows how he fought for a better life, despite getting fired and blacklisted. The IAM’s Midwest Territory is sponsoring the show.

Hosting a conference during these times was difficult, but the MSCM was up to the challenge as all safety guidelines were followed. The donation of face coverings by Midwest Territory General Vice President Steve Galloway, along with the adherence to social distancing, helped make this a successful conference.

Missouri State Auditor Nicole Galloway was the special guest speaker. She delivered a powerful message on how she plans to move the state forward for all working-class Missourians. Galloway, who is challenging Governor Parson in November, stands with the Machinists and all organized labor against any right to work legislation.

On the subject of politics, IAM Midwest Territory General Vice President Steve Galloway included in his remarks a speech from former IAM International President George Kourpias, given at the Midwest States Conference of Machinists in 1989:

“As long as I’m on the subject of political action, let me throw in my own opinion. It is time we started educating our members that when they vote in presidential elections, they aren’t voting just for the man or an individual candidate. They are voting for a government – the whole executive branch of government.

“When Ronald Reagan was elected, we didn’t get just Ronald Reagan… We got Edwin Meese as Attorney General, who didn’t give a damn about the Constitution or justice, but took money and fixed crooked defense contracts. We got a crooked Secretary of Labor Donovan, who never pretended to represent the interests of workers. We got a Secretary of Commerce and a Special Trade Representative who didn’t give a damn about the U.S. industrial base or jobs for Americans, but gladly promoted the export of our technology, production and jobs to other countries. We got the Poindexters, the Ollie Norths and the General Noreigas and a hundred other thieves and sleaze operators.”

“History is repeating itself, brothers and sisters,” said General Vice President Galloway. “Some of our members believe they are voting for Donald Trump – the man. But what they are really voting for are his anti-worker, anti-union appointments – like Barr, DeVoss, Mnuchin, Stephen Miller, Jared Kushner and one or two more Supreme Court Justices. We must educate our union brothers and sisters on choosing the right candidates to lead this country. Candidates of dignity and respect for the working class. Candidates that will fill their administration with pro-worker appointees. Let’s do our part to get out the vote this November 3rd, brothers and sisters.”

“The Missouri State Council of Machinists has always played an integral role in securing and protecting the work of Boeing workers in their state,” said IAM International President Robert Martinez Jr. “Their hard work has resulted in contracts that ensure these workers will continue to build the F/A-18E/F and F15 fighter jets, along with weapons and support programs. I’d also like to thank Missouri State Auditor Nicole Galloway for her continued support of the Machinists Union. She is an ally to the labor movement, and has our full endorsement in her bid to be elected governor in November.”

Members of IAM Local Lodge 387 in Aerospace District Lodge 837 also convened in early August for a field Negotiations Preparation for Bargaining Committee class to get ready for GKN Aerospace contract negotiations later this year. In order to send a united message to the company, shop stewards were also included in the training. They went over ground rules, surveys, research, communications and mobilization strategies.

The IAM represents more than 530 members at GKN.

Enter Your Pooch’s Photo in the GDA PAWSitivity Calendar Contest

Guide Dogs of America , the IAM’s favorite charity, has high hopes for 2021 so they’re kicking off the new year with the most PAWSitive calendar you’ve ever seen. For only $10 you can enter into the 2021 Photo Calendar Contest by submitting a photo of your furry friend, along with something PAWSitive your dog has done.

The contest will be open for submissions and voting from Monday, August 24 through Monday, September 14, 2020.

Family and friends can support your pup’s photo entry by voting! $1 = 1 vote, and there’s no limit on how many times people can vote. There will be an overall winner, as well as winners by category.

The categories are as follows:

* Please note: photos will not be approved if they feature dogs in vests, coats, or scarves from other service dog schools or organizations.

Your generosity and participation will allow us to continue transforming lives through partnerships with service dogs.

The post Enter Your Pooch’s Photo in the GDA PAWSitivity Calendar Contest appeared first on IAMAW .