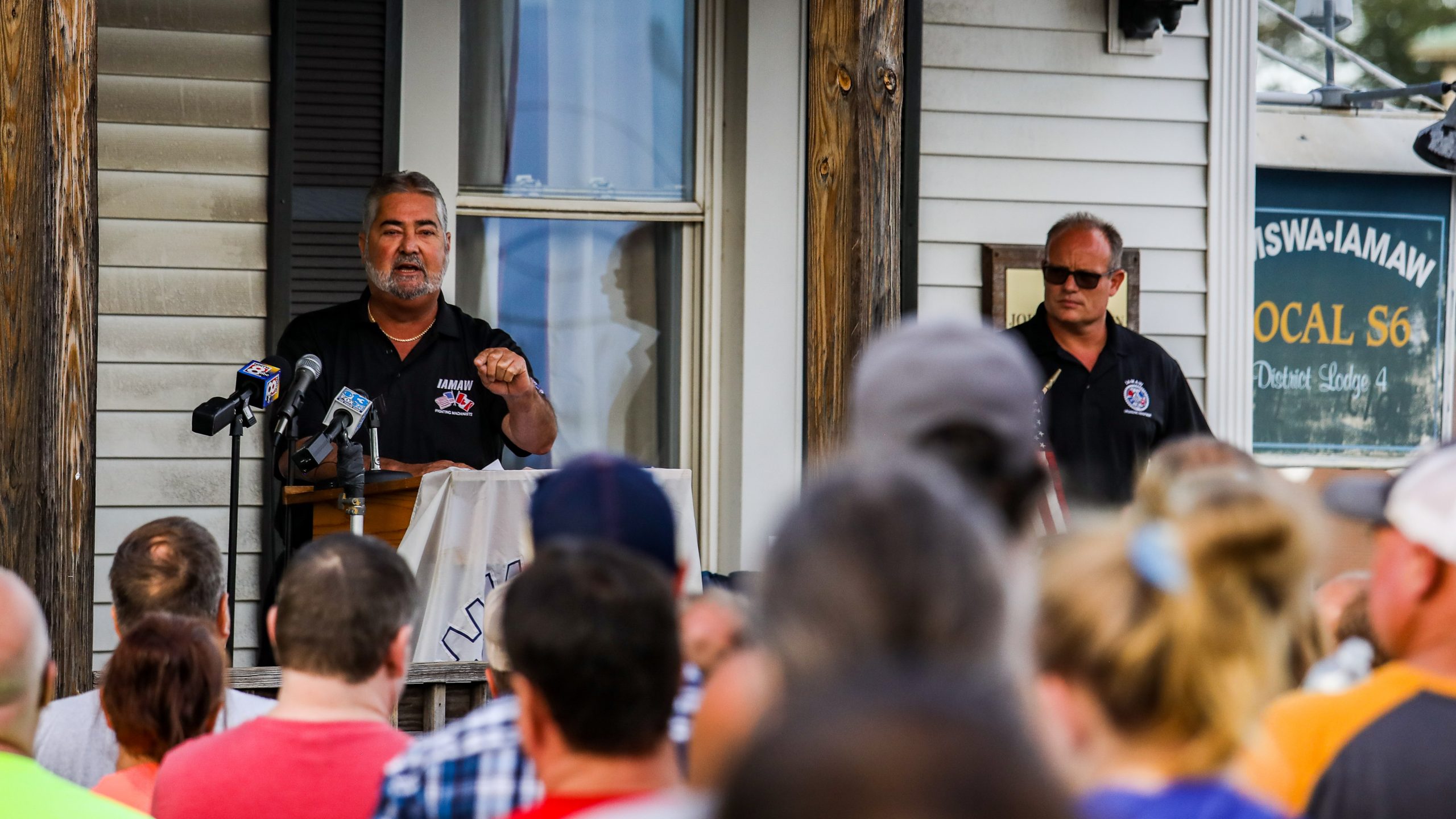 “IAM Local S6 has shown the world that together working people can stand up and win for themselves, their families and their communities,” said IAM International President Robert Martinez Jr. “This fight for dignity, justice and good Maine jobs will go down in the history books of the Machinists Union and all of organized labor. I could not be more proud of our IAM Local S6 membership and negotiating committee, District 4 representatives, Eastern Territory staff and everyone who stood with the IAM and the best shipbuilders in the world. We are also grateful for the Federal Mediation and Conciliation Service and Director Richard Giacolone for helping us get this agreement resolved.”

Federal mediators helped both sides reach a tentative agreement  on Aug. 7. IAM Local S6 members received the contract in the mail and voted online and by telephone from 12:01 a.m., Friday, Aug. 21 to noon, Sunday, Aug. 23. 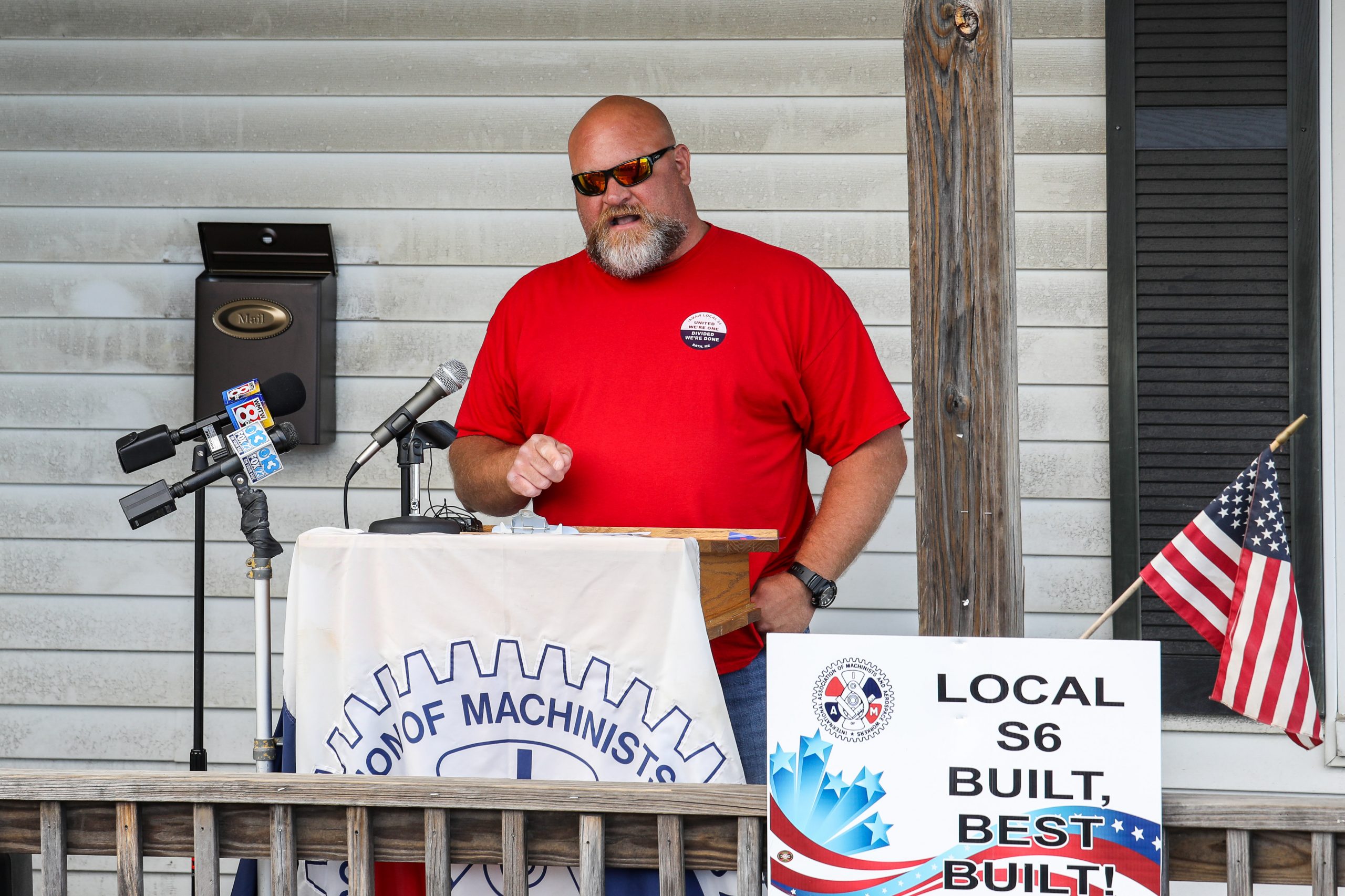 “This strike was a testament to the culmination of Local S6 leadership, our negotiating committee and the incredible power of solidarity shown by our membership,” said IAM Local S6 President Chris Wiers. “Now that we successfully protected our contract language with respect to subcontracting and seniority, we need to get back to work and continue to prove to the U.S. Navy that ‘S6 built is best built.’”

“I can only salute the Brothers and Sisters who not only stood up for themselves and their families, but for the entire labor movement,” said IAM Eastern Territory General Vice President Jimmy Conigliaro Sr. “They made a statement that we will not give into corporate greed or, most of all, disrespect on the job. IAM Local S6 members didn’t back down, even when faced with hard times at home without a paycheck for months. I couldn’t be more proud of our membership.”

IAM Local S6 members received significant support  from elected officials and the community for the duration of the strike, especially from U.S. Reps. Jared Golden and Chellie Pingree, who publicly supported  Local S6 several times. State Senate President Troy Jackson, State House Speaker Sara Gideon, State Senator Eloise Vitelli and other state and local elected officials also supported Local S6 members. Democratic presidential nominee Joe Biden commended Local S6 for “standing up for what is right” and showing “the power of their collective voice and the power of unions to ensure workers get a fair return for their work.” 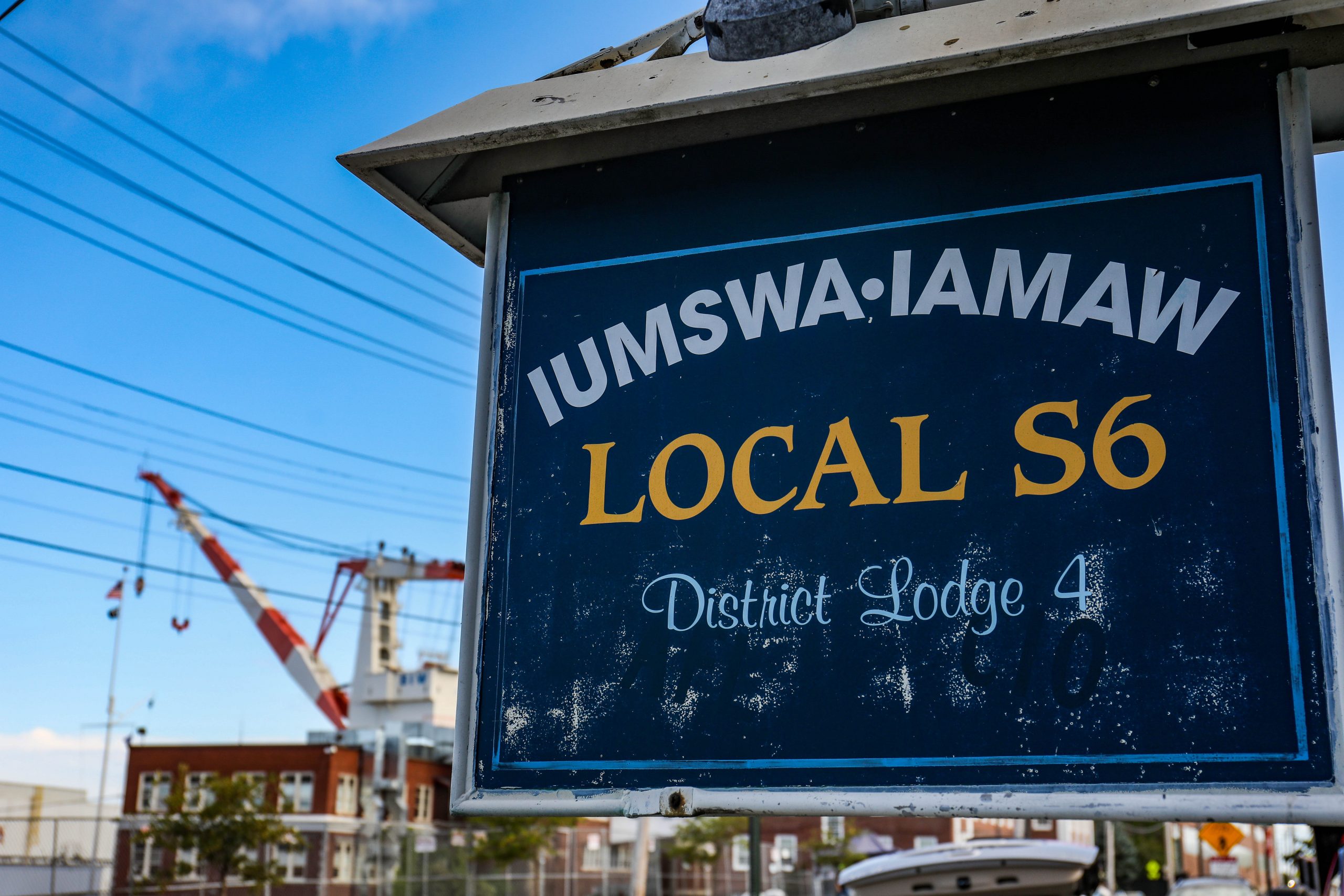 “The leadership of the Local, the professionalism of the negotiating committee and the solidarity of our members has been remarkable and unwavering throughout these negotiations and strike,” said IAM General Vice President Brian Bryant. “Each one was a major factor in successfully reaching a fair agreement with BIW. I want to congratulate our members on this hard earned victory. Their solidarity and sacrifice has paid off.”

“This was a strike for the ages,” said IAM Grand Lodge Representative Dave Sullivan. “The older generation of Machinists taught the younger generation what solidarity means. Everybody at every level of this union worked together and showed what we can do when we’re united. When you’re on the right side of history, the sacrifice pays off.”

The IAM Local 2921 Negotiating Committee for Local 2921, along with staff members from District 140 and Air Transport Coordinator Keith Aiken participated in the Negotiation Preparation for Bargaining Committees Program. For the first time the program included an online negotiation simulation from the William W. Winpisinger Education and Technology Center in Hollywood, MD, which is closed for the remainder year because of COVID – 19.

The members are preparing for their upcoming negotiations with Garda. The local represents Pre-board Screening Personnel at Toronto Pearson International Airport who are certified by the Canadian Air Transport Security Authority.

“The committee worked hard, and after the virtual training they are better prepared to advance the needs of the Local Lodge Union members,” said Frietchen.

“The committee was excited to get started on their training and the virtual training worked very well,” said Aiken. “Our training instructors are world class and this training has helped our team get ready for our upcoming negotiations with Garda.”

“Amidst this COVID pandemic, the IAM’s negotiating committee for Local 2921 is facing the most challenging environment we could have imagined, yet they stepped up to the challenge and are prepared to move forward with their bargaining agenda,” said IAM Canada General Vice President Stan Pickthall. “It is a great deal of work to prepare for negotiations, and this committee demonstrated their ability to adapt as they worked through the training and exercises using an integrated training that included live and virtual elements.”

“Though COVID-19 has presented extraordinary challenges to the members we represent and to the organization as a whole, myself and the entire Executive Council are committed to continuing the important and necessary work of education, organizing, representation and bargaining,” said International President Robert Martinez Jr. “The online Negotiation Prep Program provided by the Winpisinger Center to the members of Local 2921 is indicative of the new ways we are approaching the work of the organization. Education remains essential to our future as a powerful and effective labor organization. I am proud of the committee for their willingness to engage in this online program, and am confident are now better prepared to represent their members at the table.” 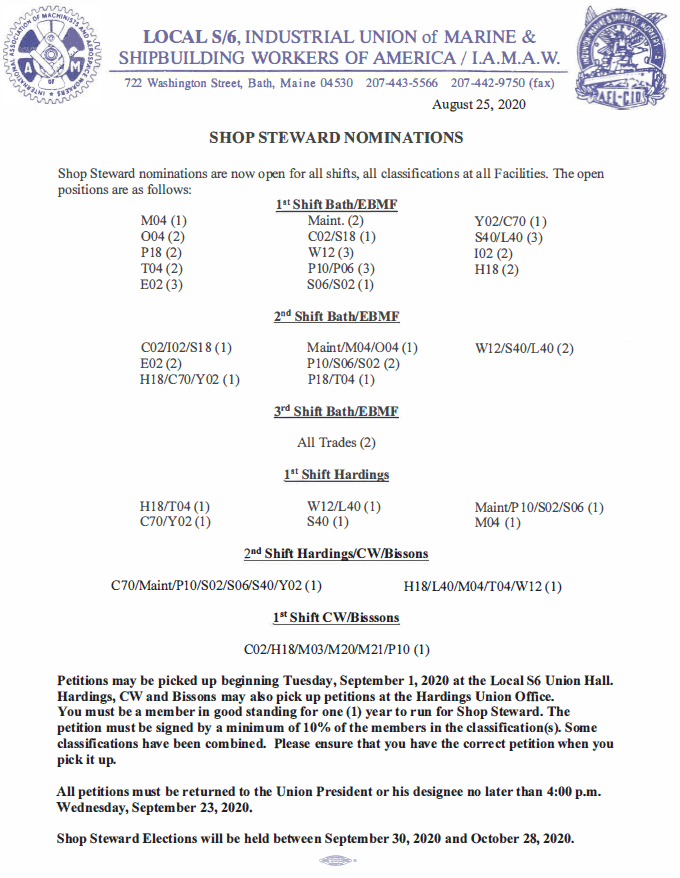 When the Machinists Union was founded in 1888 and for years after, there were no women in that Atlanta railroad pit, brainstorming about how to get better wages and working conditions. but that doesn’t mean they didn’t want­­ those things. “They wanted the freedom to decide how to live their lives, whether that was homemakers or workers or advocates or all three,” said Carla Siegel, IAM Deputy General Counsel. “They wanted the freedom to be able to have a voice in the policies that affected their families, that affected their schools, that affected their communities and their coworkers.”

In the 19th and 20th centuries, women were often treated as second class citizens, regardless of their skills. yet, they fought for the right to vote, just like men did in local, state and national elections. “They engaged in nonviolent protest, which was nonetheless illegal and they paid the price for that,” said Mary McHugh of the William W. Winpisinger Education and Technology Center. “They went to jail, they faced physical dangers, in order to put public pressure on elected officials to move women’s suffrage forward as a constitutional issue.”

Deputy General Counsel Carla Siegel says technically, the constitution didn’t actually prohibit women from voting. “It doesn’t refer to gender at all and some states allowed it, but because there were strong forces that were prohibiting women to vote in certain states, there was the push for the 19thAmendment to make it clear that of course, women had the right to vote.”

One hundred years later, women of all races, ethnicities and identities are exercising the rights to vote, despite the fact that many were initially excluded from white women’s suffrage efforts in the early 1900s. “African American women, Native American women had to continue to fight to really be able to realize a right to vote what the constitution said and what the reality was, were not the same things,” McHugh said.

In 2020, women of color are finally getting the recognition they deserve… women like Mabel Ping-Hua Lee, 16, who led ten thousand people in the New York suffrage parade in 1912, or Ida B. Wells, who created the Alpha suffrage club in 1913. “It’s a huge accomplishment,” said Vivianne Simon of IAM Local 1295 in Toronto, Canada. “We need to get more people involved just to show the solidarity for women and to be there for those who basically died for us, to acknowledge them and to show them respect by all coming together to bring it higher. Raise the bar.”

Although Simon lives in Canada, which gave women the right to vote two years before the United States, she and other IAM members understand the significance of the anniversary and the parallel it has to voting in union elections. “Well, I love that we’re celebrating a hundred years and I’ll say a hundred years of success because that’s what women’s suffrage was all about, gaining these types of rights,” said Kimberly Fedd of IAM Local 774 in Wichita, Kan. “This year in particular is a big year for our local and our district. Elections are coming up… that right was fought for and it’s a big deal.”

Women have made great strides in the workforce, even though all of us still don’t have equal pay for equal work in the United States and Canada. But, we have a better chance if we’re in a union like the IAM. Nevertheless, having a right and using it are two different things. “If you’re visible, if you’re active, if you’re vocal through your vote, through attending meetings, through getting involved in the subcommittees that may exist in your local or in your district, that’s how we move forward our agenda as women and as women inside the labor movement,­” said Ines Garcia-Keim, President of the New Jersey State Council of Machinists.

It’s a movement that still needs to be held accountable when it comes to equal rights, gender equity and inclusion, on the shop floor and in the union hall. “Unions aren’t perfect. We have still have a lot of work to do,” said Dora Cervantes, IAM General Secretary-Treasurer. “But, the wage gap is smaller and almost non-existent in union shops. Having women move up the ranks ensures that equity remains a priority.”

The vote is in! 87% of the membership voted YES for the contract. 87% is our number. We will be returning to work. Reminder to all 3rd shift employees, your shift starts tonight at your regular working hours.

Local S6 congratulates you all on the incredible show of solidarity. For many different reasons, the membership has unified like never before.

See you on the deck plates.