WASHINGTON, Oct. 21, 2021 –  The International Association of Machinists and Aerospace Workers (IAM) and the Georgia Democratic congressional delegation, led by U.S. Rep. Nikema Williams (D-Ga.), are working to help firefighters and facility safety technicians at Lockheed Martin in Marietta, GA, fight to save their jobs.

Lockheed Martin recently announced that it plans to outsource fire protection at the Marietta facility. The 41 firefighters and three safety technicians are members of the IAM Local 709. The majority are U.S. military veterans and have provided fire protection for the facility since 1961.

“The firefighters and safety technicians in the Lockheed Martin Fire Department are essential workers and we hope to save the jobs of these faithful first responders,” said IAM Southern General Vice President Rickey Wallace. “They risk their lives every day to keep the facility and the personnel inside safe from harm. The thousands of IAM members inside the facility will stand in solidarity with our impacted members. Outsourcing should be the last thing on Lockheed Martin’s agenda. The company should focus on putting out great products that help keep our nation safe and relying on experienced personnel to keep the workers safe. We will commit our full resources to fight back this outrageous outsourcing scheme. I applaud Congresswoman Williams and other members of the Georgia congressional delegation for sticking by our members during this difficult fight.”

Rep. Williams is leading the Georgia Democratic congressional delegation in an effort to protect union workers at the Lockheed Martin Aeronautics facility in Marietta.

“The Lockheed Martin Marietta facility employs over 5,000 Georgians working across a 900-acre campus with myriad buildings, entryways, and corridors,” the letter reads . “As firefighters, first responders, and EMTs, the Marietta Fire Safety Department has decades of training and experience protecting the safety and health of the workforce, as well as the government funded assets, located on this large and complex campus. These workers have the institutional knowledge of this campus that is necessary to best protect their colleagues. We are concerned by the risks that could come with replacing this highly trained and experienced safety team with outside contractors with little knowledge of the facility.”

Click here  to read the full text of the letter.

The IAM, North America’s largest airline union, stands in full support of the swift implementation of the 10-hour rest rule for Flight Attendants. The rule to give Flight Attendants an extra hour of rest was mandated in the 2018 FAA Reauthorization Act, and was required to go into effect that year, but has been delayed by the previous administration.

On Thursday, after years of advocacy from the IAM and other airline unions, the FAA moved forward with a rule that would increase minimum Flight Attendant rest time from nine hours to 10.

“Our union is dedicated to ensuring the safety and well-being of all workers and this rule change will undoubtedly help provide much-needed relief for Flight Attendants,” said Richard Johnsen, Chief of Staff to the International President. “Flight Attendants are on aviation’s frontlines and must be given the proper rest in order to perform their jobs safely. It is of the utmost importance that the 10-hour rule is implemented as soon as possible.”

“The IAM has been championing this rule change since its initial proposal and has aggressively been lobbying on Capitol Hill for over a decade,” said IAM International President Robert Martinez Jr. “Our Legislative team has been instrumental in leading this charge by meeting countless times with lawmakers from both parties and holding rallies in support. Flight Attendant fatigue is a serious issue that can affect their health and safety and also that of traveling public. The extra hour of rest is vital and long-overdue.”

Recently, three IAM Local 1943 members, Mike Gray, Brian Banks and Shawn Patrick, completed the third 260-hour Heating, Ventilation, and Air Conditioning (HVAC) training class co-administered by Machinists members from Cleveland-Cliffs in Middletown, OH. The Local fought for and won the right to not only co-administer the class with the company, but be paid for training.

These graduates will join the Local’s other 16 current HVAC journeymen out in the field.

“All of our HVAC work used to be done by contractors, costing the company around $250,000 a year for them to do this work,” said Neil B. Douglas, Local Lodge 1943 President and Directing Business Representative. “We showed the company that our members need to be directly involved in the training and performing of all the work.”

“This program’s growth and success can be attributed to the foresight and hard work of the members of Local 1943,” said IAM Eastern Territory General Vice President Brian Bryant. “There are thousands of units to service in the steel mill, many of them vital to the continuous operations of the plant, and they will continue to be worked on by the industry’s best union technicians.”

The course is designed to provide students with the basics of air conditioning. Topics are geared toward high temperature refrigeration (air conditioning) systems such as package equipment and split-type, central air-conditioning systems. 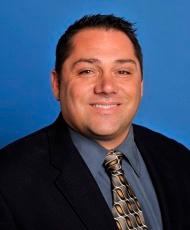 The IAM has reached a tentative agreement covering about 300 workers at Spirit Airlines.

The proposed five-year labor contract includes wage increases that, on average, would be 30 percent higher than current earnings. This would create the highest wages and overall compensation rates for ramp agents in the airline’s history. The proposed deal, which the IAM negotiating committee unanimously recommends members ratify, would also include more opportunities for double-time pay, new trainer positions and paid vacation for part-time agents. The proposal also includes a ratification bonus of $100 per year of service, with a $500 minimum.

The ratification vote on the tentative agreement is set for November 4.

“This proposal is the result of our strong negotiations team and it will help improve the livelihood of each and every member at Spirit Airlines,” said Richard Johnsen, IAM Chief of Staff to the International President. “I would like to thank District 141 President Mike Klemm and his staff, as well as IAM Airline Coordinator Tom Regan and Grand Lodge Representative Gil Simmons for the great collaborative work to secure this tentative deal. Our members can stand proud in the work of the committee, which held strong for improving the economic provisions that sets a tone of respect on the job and compensation to match.”

“The negotiating committee held strong with our demands for improved wages and other demands voiced by our members,” Airline Coordinator Tom Regan said. “These hard-working men and women have been on the frontlines of the COVID-19 pandemic. This proposed labor contract rewards that dedication by each and every member who has made sure all Spirit Airlines’ passengers get to their destination safety.”

“I want to thank our IAM Negotiating Committee at Spirit for the outstanding work they’ve accomplished with this agreement. I particularly want to recognize the contributions of Local 368 members Almarie Jean, Linda Germain, Christopher Willis, and Gregory De La Cruz, who helped put this deal together,” said District 141 President and Directing General Chair Mike Klemm. “Along with District 141 Assistant General Chairs Andrea’ Myers, and Lead Negotiator Tony Gibson, this team spent countless hours away from loved ones to create a better workplace for our Spirit membership.”

Please click the link below for the 10/19/21 Leadership Alert. It pertains to the Vaccine Mandate. 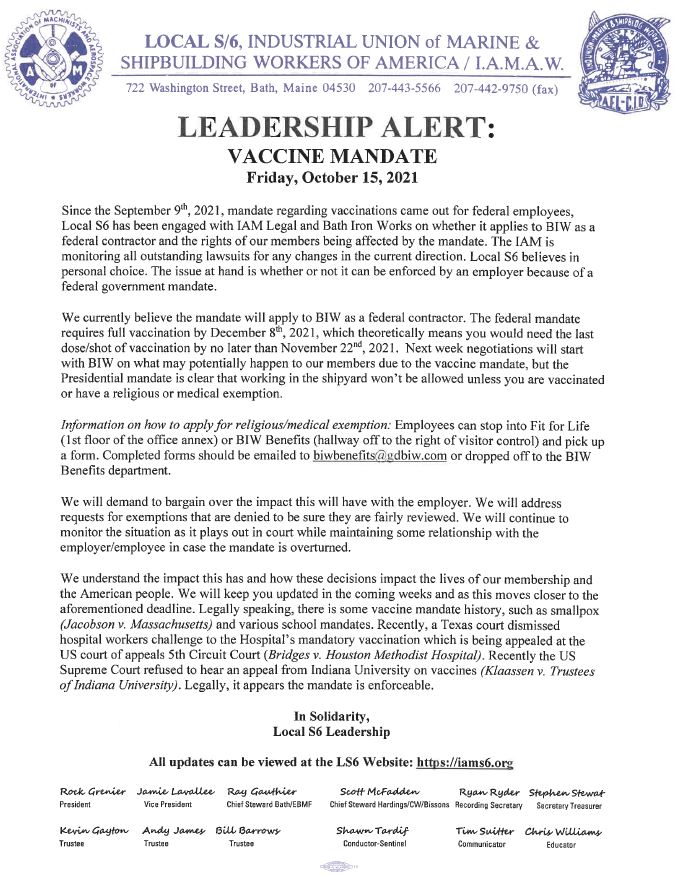 BARBOURSVILLE, W. Va., Oct. 14, 2021 – Fifty members of Machinists Union Local 598 (District 54) who had been on a two week strike for a fair contract at Sulzer Pumps in Barboursville have voted overwhelmingly to ratify a new, improved collective bargaining agreement. Machining and foundry workers will return to work on the night of Sunday, Oct. 17.

Highlights of the new three-year agreement include:

–       Wage increases in each year of the agreement, including back-dated wage increases from the beginning of strike

–       Stabilizes healthcare for life of the agreement

“I’m so proud of IAM Local 598 members for standing strong and winning the contract that themselves and their families deserve,” said IAM District 54 President and Directing Business Representative T. Dean Wright, Jr. “Thanks to their determination and the support of the community, we have protected some of the best careers in the area. Our members look forward to getting back to work building a great product right here in Barboursville.”

“I worked under the SCA and understand the importance of the work performed by these men and women, many are also former U.S. Military themselves,” said Ramon Garcia, Southern Territory Organizing Leader. “Joining the IAM and having a collective bargaining agreement is a critical tool to guarantee benefits, raises and dignity on the job. It made a difference for me. Welcome to the IAM!”

“I want to welcome our new members who provide an invaluable service to our country into our Machinists family,” said IAM Southern Territory General Vice President Rickey Wallace. “Credit for these organizing wins goes to our Organizing Leader Ramon Garcia, Grand Lodge Representative Joe Greaser for leading the campaign at Vertex, District 776 Directing Business Representative Paul Black and his staff at Fort Hood and District 75 Directing Business Representative Steve Jordan and his staff at Whiting Field. These teams worked countless hours with our new members, giving them the tools and resources necessary to fulfill their quest to join the IAM.”

Millions of Social Security beneficiaries, including many IAM members, will receive a 5.9 percent cost-of-living increase in 2022. The average retired worker can expect to receive an additional $92 per month.

Active and retired IAM members have long called for an increase to earned Social Security benefits and for measures that secure the solvency of Social Security. As Machinists, we continue our fight to ensure Social Security continues to pay retirees their life-long earned benefits. The IAM remains committed to the fight to achieve dignified retirement benefits for our members and all seniors.

Union retirees were instrumental in some of the first significant Social Security benefit increases and the implementation of Medicare.

“While this is welcome news for IAM members, retired Americans, disabled veterans and millions more Social Security beneficiaries, we must do more to ensure to help older Americans and others in need make ends meet,” said IAM International President Robert Martinez Jr. “We can start by passing the Build Back Better Act, which would lower the cost of prescription drugs. It is also past time to make the wealthiest Americans pay their fair share into Social Security.”