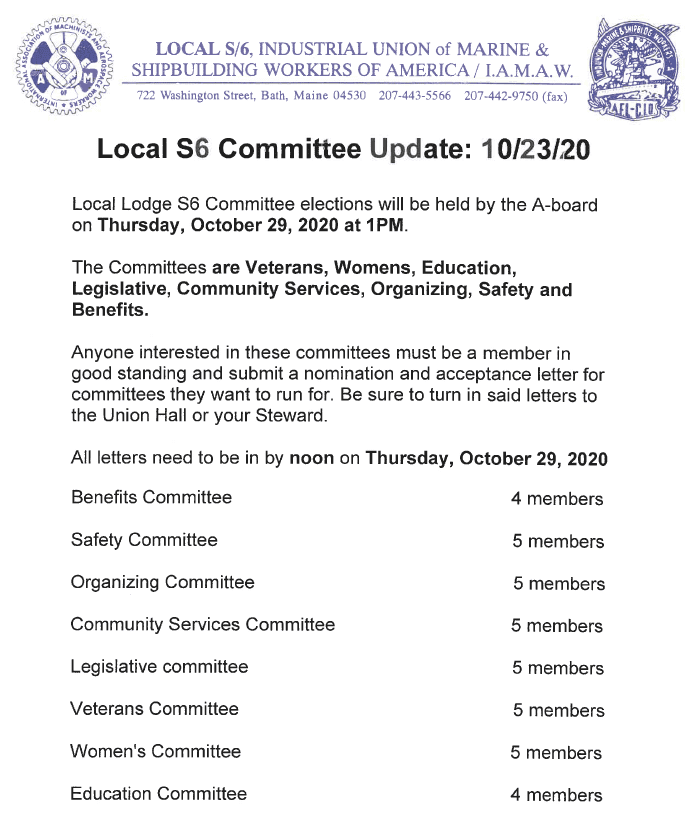 Please review the incentive award memorandum below. The Union and the Company with the help of the Federal Mediation and Conciliation Service meet weekly, outlining various issues and providing advice and methods to better manage the shipyard for the benefit of all. This memorandum is reflective of these weekly meetings. The parties are working collectively to set attainable goals while working to recover the schedule. This process is important for our shipyard and our customer, the US Navy. The Union is committed to continuing this process to ensure a stable future. See below: 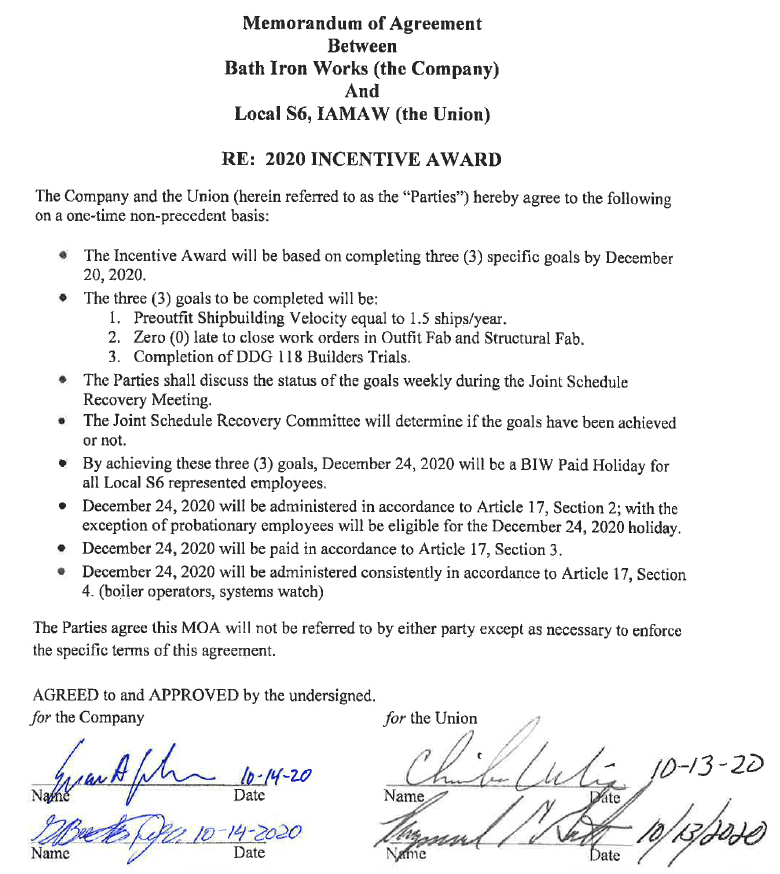 Overall, by achieving the three goals listed, December 24, 2020, will become a BIW Paid Holiday for all Local S6 represented employees.

Please keep this in mind as we all work towards recovering schedule.

Our membership has stood strong throughout this pandemic. We have held up our end of the bargain to keep our economy moving, even while thousands of our own Brothers and Sisters have been laid off or furloughed. Even worse, far too many have been sickened or passed due to the fumbled response to the coronavirus.

Your union has been out front each step of the way, advocating and winning the relief our members and millions more working people need to save their families and communities across the country. We succeeded in passing three rounds of relief, including increased unemployment benefits, stimulus checks and targeted relief for airline and aerospace workers.

Unfortunately, because of this administration’s incompetence, the pandemic continues to rage on. Our members need relief. The entire nation needs a lifeline.

But Senate Majority Leader McConnell, along with upwards of 20 Republican Senators, don’t believe our members or any struggling American family deserve another dime. The HEROES Act, passed by Speaker Pelosi and House Democrats, has sat on McConnell’s desk for five months without action. Put simply, a handful of Republican hardliners are singlehandedly holding up much-needed relief for our families.

We are done waiting and we are outraged. Instead of helping Americans who need it most, Mitch McConnell and his cohorts would rather spend the Senate’s time rushing through the unprecedented confirmation of a right-wing Supreme Court Justice—just days before the election. We join millions of Americans in telling Mitch McConnell to stop this madness and do the right thing for working families.

Especially frustrating is the refusal to pass an extension of airline worker relief, known as the Payroll Support Program. This initiative, led by the IAM and a coalition of aviation unions, proved to be one of the most successful jobs programs in the CARES Act. It kept hundreds of thousands of airline workers on the job and continuing to serve communities from coast to coast.

This relief expired on October 1, and now thousands of airline families are laid off and furloughed due to the rigid ideological stance of conservative radicals in Washington, DC.

No more games, Mitch. Time is up.

In February 2019, Schneider Electric announced they were closing the Peru, IN plant where electrical components have been produced for over 100 years, and moving the work to Mexico and other locations. The 300 highly-skilled IAM members working at the facility have since lost their jobs.

“I was crushed. I mean, I planned on retiring from there,” said IAM Local 2069 member Susan Seifried who worked at the facility for nearly 20 years. “Now my kids don’t have insurance. I got to find a job at 50. And then, not a whole lot of people want to hire middle aged people.”

“It absolutely is corporate greed and they don’t, they have not offered any explanation for it other than it saves the company money,” said Local 2069 member Chad Sanders.

The Schneider Electric plant in Peru is one of dozens of IAM-represented facilities that have closed during the Trump administration.

Since the announcement of the closure, the IAM proposed ways for Schneider to save money through wage and benefits cuts in exchange for saving these jobs.

“They wouldn’t accept it cause they’re greedy,” said Seifried. “It makes me mad that we have worked hard to make them money and we don’t get treated that well anymore.”

“The way Schneider turned their backs on these members and the Peru community is sickening and disgraceful,” said IAM International President Robert Martinez Jr. “Something has to be done to stop the erosion of manufacturing jobs we’ve seen in the past few years. American workers make these companies what they are, then get left behind in the journey to find the cheapest labor.”

“Schneider’s closing of the Peru plant is just another example of the blatant disregard for American workers we are consistently seeing under this administration,” said IAM Midwest Territory General Vice President Steve Galloway. “The hard-working and highly-skilled members working there did everything that was ever asked of them, only to have their jobs shipped to Mexico and overseas. It’s appalling, disgusting and un-American to see working families treated this way.”

The IAM mourns the loss of life-long labor activist and retired Midwest Territory Chief of Staff Dean Kocina, who passed away peacefully on Wednesday, October 14, 2020 at the age of 89.

Kocina served his country honorably during the Korean War in the U.S. Army from 1951-1953 as a combat engineer. He served as a Business Representative for the IAM from 1964 through 1977 before being hired as a Grand Lodge Special Representative in 1977.

In 1981, Kocina was promoted as the Administrative Assistant (now termed Chief of Staff) to the Midwest Territory General Vice President where he served until his retirement in 1990.

Brother Kocina will be missed by his entire Machinists Union family.