“The Machinists Union sends our profound congratulations to President-Elect Luiz Inácio Lula da Silva and the people of Brazil. Like the labor movement, Lula’s life story is one of perseverance. As a young man who took machinist training courses and then rose to the top of the Metalworkers Union, Lula will again bring a workers’ perspective to the Brazilian presidency.

“After wrongful persecution that took his freedom, Lula never wavered in his fight for a better future for his country, to maintain democracy and to advocate for the working people of Brazil. The IAM, which has worked closely with Brazilian unionists, including exchange trips of labor activists , looks forward to continuing our global advocacy for social justice alongside Lula and a Brazilian government that will once again fight for working people.”

Please find the results of the 2022 LS6 Officer and Non-Officer Positions Election.

With less than two weeks until Election Day, the International Association of Machinists and Aerospace Workers(IAM) Labor 2022 campaign has already mobilized hundreds of volunteers to knock on thousands of doors.

The Machinists Union’s member-to-member program, which has been active since September, has made thousands of calls to Machinists Union members in Georgia, North Carolina, Ohio, Wisconsin, Minnesota, Pennsylvania, Arizona, and Nevada. In addition to calls, hundreds of Machinists have been deployed to the battleground states to knock on doors and gain support for endorsed candidates and issues. The Machinists Union’s member-to-member 2022 membership political education campaign is engaging in a wide range of GOTV actions, including robocalls, text messages, emails, phone banks, and leafleting at worksites.

“I want to thank all IAM members who are participating in the get out the vote efforts in the battleground states,” said IAM International President Robert Martinez Jr. “Our union is dedicated to getting worker-friendly candidates elected to office. The Biden-Harris administration needs a Congress that will move an agenda that benefits workers. We have one of the labor movement’s best Legislative and Political departments, and their political education efforts are allowing us to reach thousands of our members.”

“Our union must have a political education program that mobilizes our members to vote at the polls,” said IAM Headquarters General Vice President Brian Bryant. “We have activated the majority of our staff at our headquarters to help with the get-out-the-vote efforts in the states. We must work to get worker-friendly candidates elected up and down the ballot.”

The Machinists Union will leverage thousands of volunteer hours to reach their members in key battleground states in the remaining days before Tuesday, Nov. 8. The Labor 2022 IAM member-to-member program is crucial to help elect pro-worker candidates across the country.

After years of hard work and dedication, IAM District 19 was able to win 400 hours of straight-time pay for IAM members at North Little Rock Union Pacific – Jenks Shop (NLR). The award is due to the carrier’s wrongful subcontracting of IAM work.

The carrier subcontracted out two engine overhauls that were to be done at NLR. The local team stepped into action and gathered the necessary information to progress two great claims. Their hard work was then turned over to District 19 where two claims were filed.

After a long battle with the carrier, it was finally set to be heard by a Public Law Board. In July of this year, District 19 was finally able to present this case to the board. The board ruled in the favor of the Fighting Machinists, awarding members listed in claims 400-man hours at the straight time rate of pay. This gives each member in the claims an estimated $400.

“This is a tremendous victory for our members,” said Josh Hartford, IAM Special Assistant to the International President for the IAM Rail Division. “My thanks go out to Local Chairman Robert Roush along with his team, General Chairman Kenny Krause, and retired General Chairman Jim Davis.”

“Not only did this award give our members much-deserved money in their pockets, but it also gave us some language that states that we own the engine overhaul work at North Little Rock Union Pacific,” said IAM District 19 General Chairman Kenny Krause. “This is definitely in our favor should the carrier try to take on the Fighting Machinists again with this issue.” 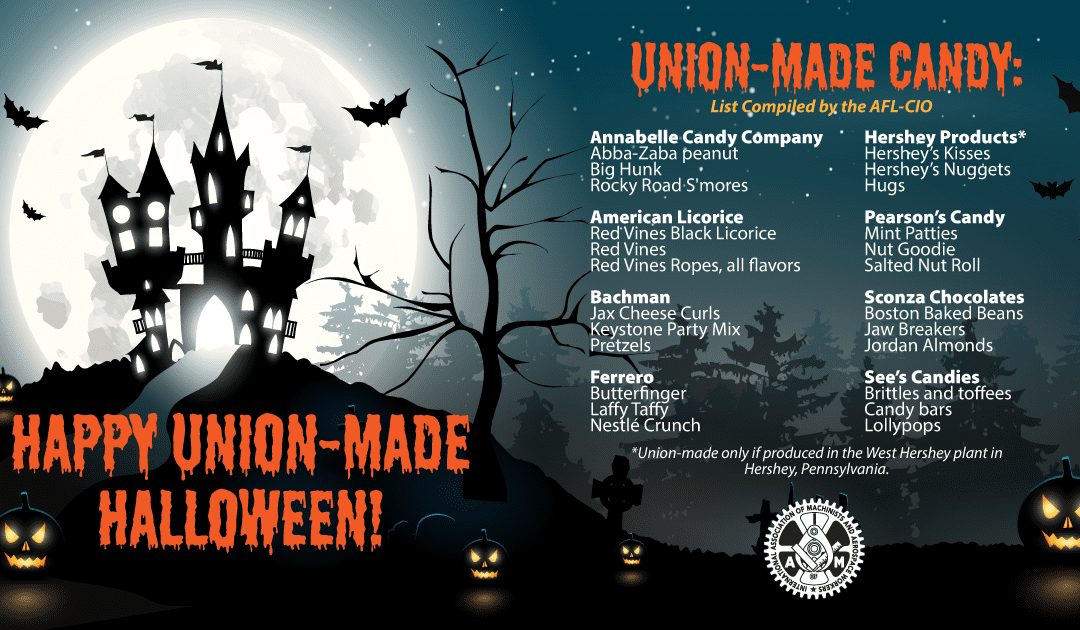 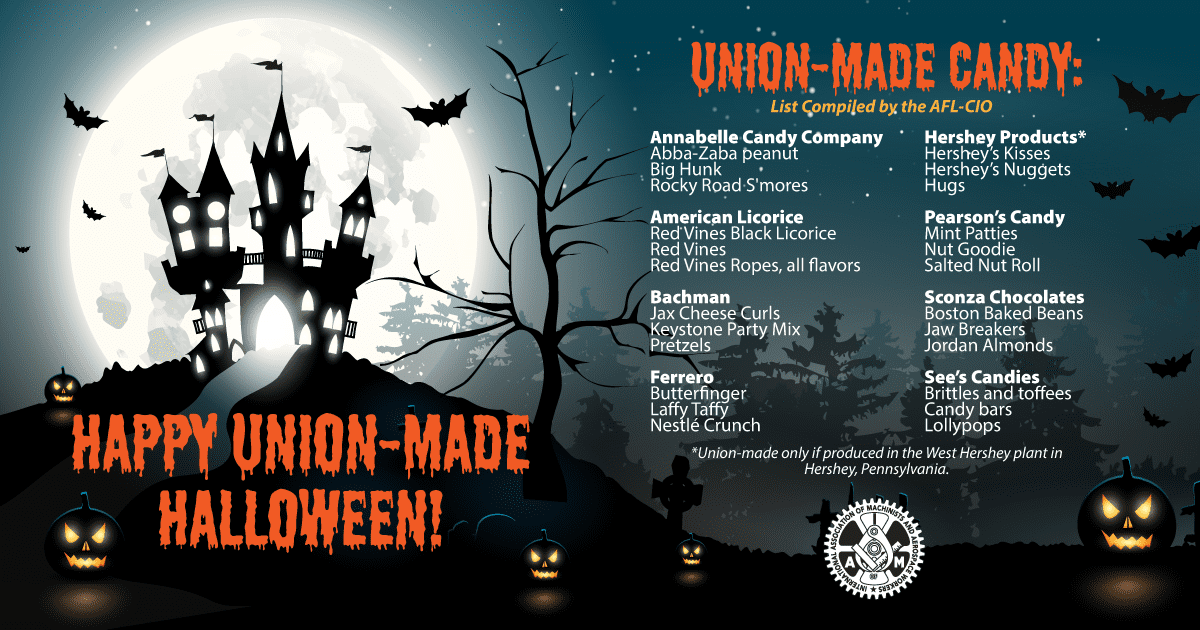 If you plan to celebrate Halloween, don’t forget to buy union-made in America treats.

See the handy list of union-made candy and sweets below, provided by the AFL-CIO.

These treats are made by companies that treat their workers fairly. When you consume these, you will be supporting the hardworking people in our union family.

*Union-made only if produced in the West Hershey plant in Hershey, Pennsylvania.