Below is a listing for the upcoming I02, 1st shift election for Bath/EBMF on Thursday, October 14, 2021.  In the event the election cannot be held on the stated date, the alternate date will be the 1st workday after the cancellation (or the Shipyard re-opens) at the same time and places listed below. 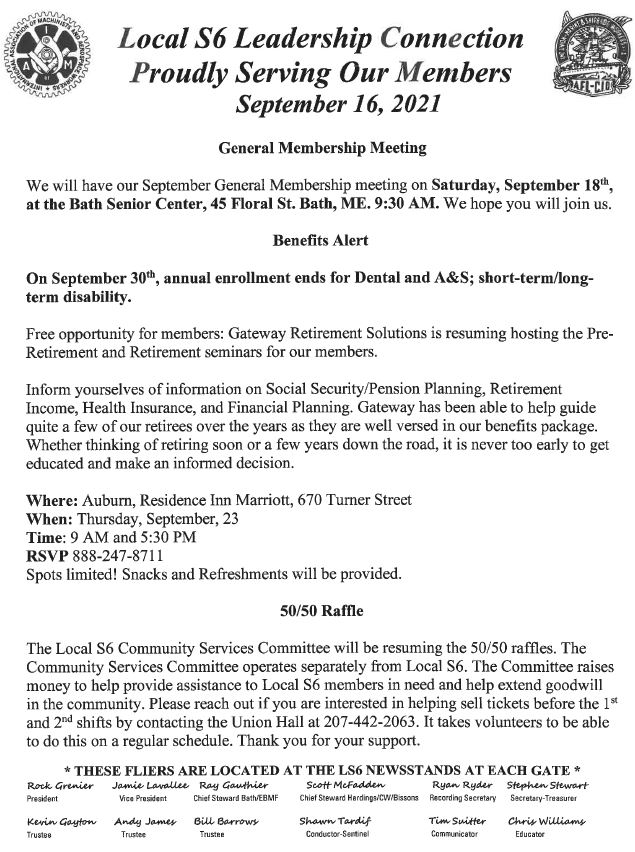 Shop Steward nominations for the above classification(s), shift, and facility are now open.  Petitions may be picked up beginning on Tuesday, September 14, 2021, at the Local S6 Union Hall.  You must be a member in good standing for one (1) year to run for Shop Steward and the petition must be signed by ten percent (10%) of the members in the classification(s) affected. All petitions must be returned to the Recording Secretary (Ryan Ryder) no later than 4:00 p.m., Tuesday, September 28, 2021.

An amendment championed by the IAM and U.S. Rep. Donald Norcross (D-NJ) that would dramatically increase domestically made procurement requirements in major defense programs has cleared a critical hurdle in Congress.

The IAM, North America’s largest aerospace defense union, has been pushing the increase for years in order to strengthen the defense industrial base and domestic supply chain while helping prevent vulnerabilities created by military products being made in China and other countries.

“Buy American policies serve the public good by targeting our tax dollars for the purchase of American-made products and services,” said IAM International President Robert Martinez Jr. “We must understand that the foundation of our industrial base lies with the skills and abilities of the American worker. Congressman Norcross’s amendment would help ensure that our tax dollars are used to support the U.S. workforce and the firms who employ them.”

The amendment passed on a bipartisan vote during a House Armed Service Committee mark-up of the Fiscal Year 2022 National Defense Authorization Act (NDAA). The legislation would increase “Buy American” requirements for major defense programs from 55 percent to 60 percent upon the bill’s enactment. Requirements would further rise to 65 percent by 2024 and to 75 percent by 2029.

“I am proud to have fought for provisions that make America safer by investing in the American worker,” said Norcross. “This bill will put us on a path to build back better by increasing our domestic supply chain capabilities, strengthening our workforce, and giving our service members the tools they need to win the future fight.”

The number of Chinese suppliers in the U.S. defense industrial base has risen 420 percent since 2010, according to a report from the data analytics firm Govini.