Happy Holidays from the IAM

Sisters, Brothers and Friends of the IAM,

As 2019 rapidly nears its end and we make our various holiday plans, I want to let you know what an honor it is for myself and your Executive Council to serve our great union.

The IAM is much more than territories, districts, local lodges and shop floors—it is family. Our Machinists Union family will be in my heart as we close out the year, and my gratitude goes out to all of you for your hard work in 2019.

Whether your plans include traveling to visit family and friends or taking on the role as host, I sincerely wish you all the best this holiday season.

For those of you who remain on the job during the holiday season, I offer you a special thank you for all you do.

The post Happy Holidays from the IAM appeared first on IAMAW . 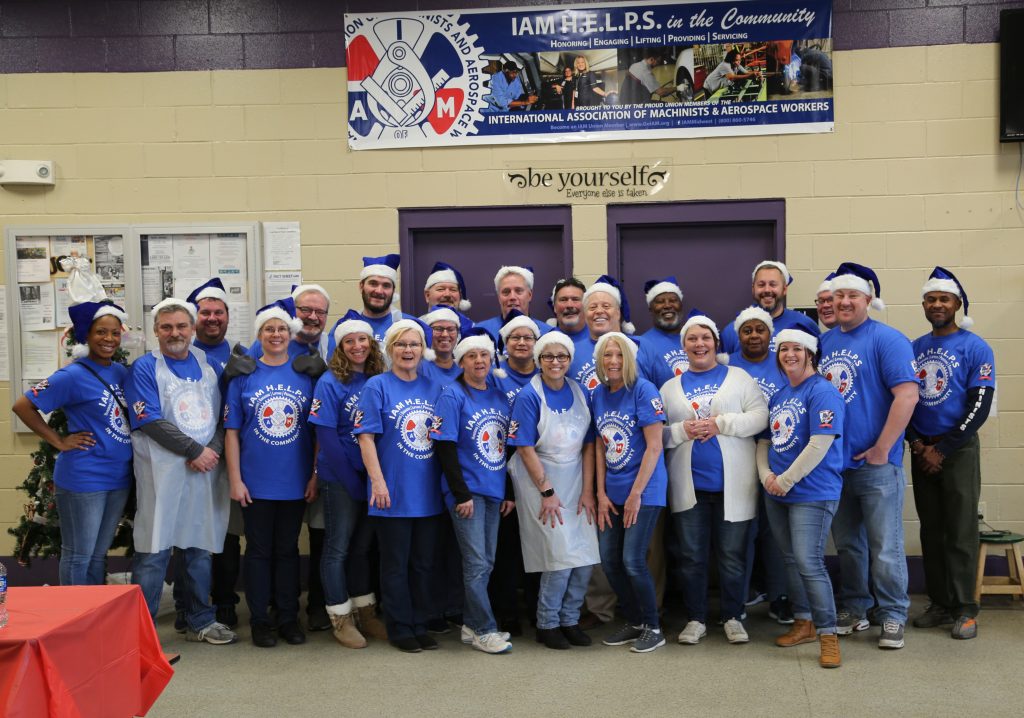 The IAM Midwest Territory staff recently donated, cooked and served more than 300 pounds of food for the homeless, as part of the Territory’s ongoing “IAM H.E.L.P.S. in the Community” program.

IAM Midwest Territory General Vice President Steve Galloway and his staff recently donated, cooked and served more than 300 pounds of food for the homeless, as part of the Territory’s ongoing “IAM H.E.L.P.S. in the Community” program. 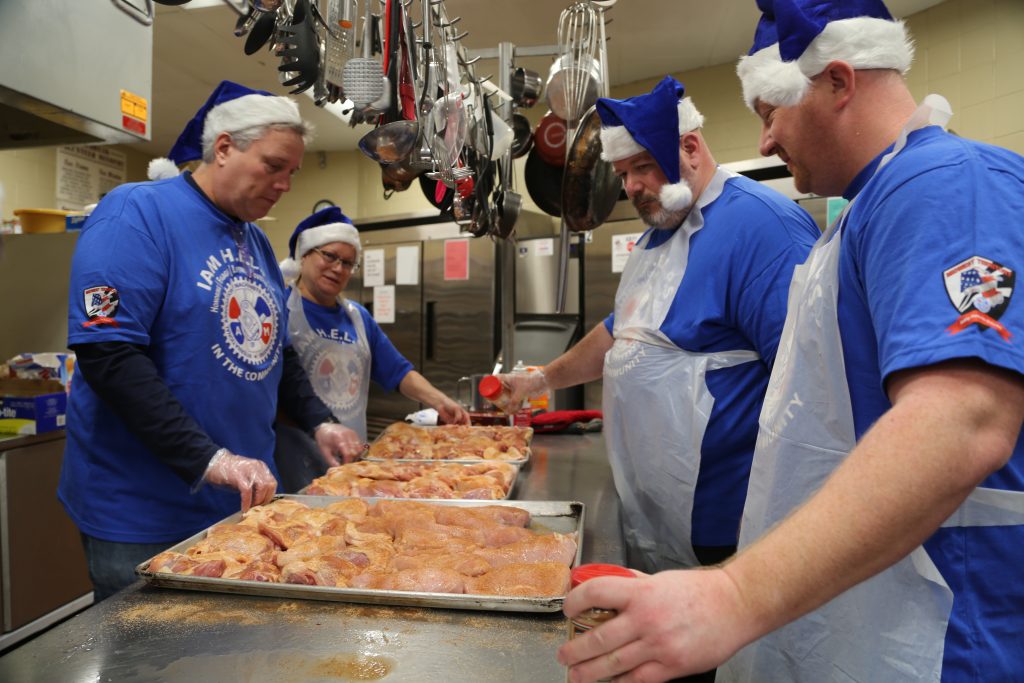 The more than 25 staff members and their spouses hauled in dozens of boxes and crates of chicken, macaroni and cheese, mashed potatoes, green beans, bread rolls and pumpkin pie to Shepherd’s Table, a local soup kitchen and shelter in Joliet, IL. Together they prepared the warm holiday meal and served it to the area’s less fortunate.

The Territory also gifted each guest with a pair of warm socks and a holiday card.

“Winters in the Midwest can be especially brutal,” said Galloway. “With the cold temperatures quickly dropping by the day, shelters across the entire Territory are opening their doors. But keeping the less fortunate around us safe and healthy takes a village.”

“Donating, cooking and serving a warm meal, while bringing with us some holiday cheer, is the least my staff and I can do to help those in need this holiday season,” continued Galloway. “And, dry socks are essential to anyone living on the streets. In fact, they are the one item that’s most requested by local shelters – yet they are donated less frequently than other items.

“This is what the IAM Midwest Territory’s H.E.L.P.S. program, now in its third year, is all about. It’s just one way the Territory is helping to do its part as a part of our ongoing commitment of ‘Honoring, Engaging, Lifting, Providing and Servicing’ our community.” 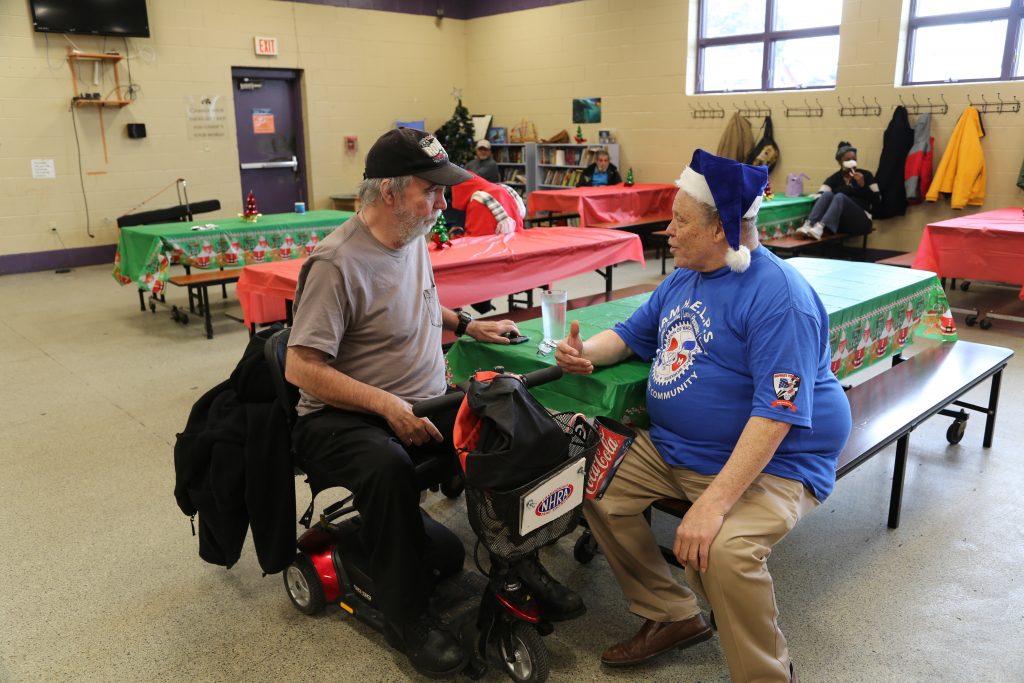 Breaking from the traditional cafeteria line where guests normally line up to receive their meals, the IAM Midwest Territory staff decided they wanted to wait on each guest, instead. Upon entering the soup kitchen, guests were greeted and asked to take a seat wherever they felt comfortable. Staff then served each guest, bringing their meals directly to them at their tables.

“Thank you,” said Gail Flatness, Shepherd’s Table Kitchen Coordinator. “For
one hour you guys helped our guests forget they were homeless.”

The IAM Midwest Territory, along with their Districts and Locals, has hosted more than 20 “IAM H.E.L.P.S. in the Community” events, with more than 450 volunteers across the Territory, to date. Each District and Unaffiliated Local is tasked with hosting at least one event per year. For more information on the IAM Midwest Territory’s “IAM H.E.L.P.S. in the Community” program, click here .

The post IAM Midwest Territory Staff Brings a Warm Meal and Holiday Cheer to the Homeless appeared first on IAMAW .

We are proud to announce that with our latest victory, the nationwide MFLC organizing campaign has eclipsed the 300-member mark in 2019. The joint campaign between the Western Territory and the IAM Healthcare Department that launched earlier in the year, has given hope to over 300 military mental health counselors, their families and the military service people they treat.

The most recent unit organized at the Marine Corps, Air Station in Yuma, Arizona voted unanimously on December 10, 2019, to join the IAM. These five MFLC’s had enough of their employer not filling counseling vacancies, and cutting pay, benefits and working conditions.

Like the previous IAM MFLC’s, the number one priority of the Yuma unit is the care of their patients. With so many cuts and vacancies, the level of service that was being delivered to America’s heroes was not acceptable and the situation could no longer be left in the hands of the company.

In a display of solidarity, the Yuma group meet before the election in order to walk into the polls together and send a message to the company, that their long and aggressive anti-union campaign did not dissuade them. In fact, the opposite occurred and the MFLC’s were more determined than ever not to tolerate a company putting profit over patients.

“So far The MFLC movement has given hope for a brighter future to over 300 MFLC’s, their families and their patients,” said IAM Healthcare Director Marti Garza. “In 2020, our goal is for every MFLC to belong to the IAM so that through collective bargaining, they can make true change in the workplace that enables them to deliver the highest level of care to our military personnel.”

Make it a Union-made Holiday Season

You can support your union brothers and sisters this holiday season by buying gifts, stocking stuffers and other items that are union made.

It’s not too late to include union products on your gift list.

The post Make it a Union-made Holiday Season appeared first on IAMAW .