The Southern Territory and Woodworkers Department 31 Guns in 31 Days Raffle drawing kicks off on December 1, with a winner being drawn every day in December. The raffle benefits the Guide Dogs of America and Tender Loving Canines (GDA).

Daily winners will be posted on the IAM Southern Territory and the Machinists Wood, Pulp & Paper Council’s Facebook pages.

The organization’s services are provided free of charge to residents in the U.S. and Canada.

For more information on Guide Dogs of America, visit GuideDogsofAmerica.com .

The post Tune in During December to See Winners of the GDA/TLC 31 Guns in 31 Days Raffle appeared first on IAMAW .

For the first time in two years, Guide Dogs of America held its in-person Las Vegas charity weekend in mid-November, raising funds to help people with blindness, visual impairment, veterans with PTSD and children with autism. The organization provides service dogs free of charge and pays for the raising, training and transportation of students and their guides.

Today is Giving Tuesday, a day for people across the world to give back to their communities and to help their favorite charities. The IAM’s favorite charity, Guide Dogs of America/Tender Loving Canines , is asking for your support.

A generous donor has offered to match dollar for dollar the first $100,000 raised, so your generosity can make twice the impact. Please donate today to help transform lives by bringing a service dog to someone in need.

GDA recently completed a merger with Tender Loving Canines, and now provides hardworking service dogs for people who are blind/visually impaired, veterans, individuals with autism, and facilities to become trusted companions that bring confidence, independence, and mobility. Their services are provided free of charge to residents in the U.S. and Canada.

The IAM Communications Department has been recognized as one of the best communications teams in the labor movement by winning three awards in the International Labor Communications Association’s 2021 Labor Media Contest .

The annual ILCA Labor Media Awards Contest recognizes excellence among union publications, websites, film, video, and other media. It is the first and largest competition exclusively for labor journalists. The 2021 winners represent the best work in labor communications and promote the highest standards of labor journalism during the 2020 calendar year.

The IAM Communications Department won awards from the IAM Journal, earned media and in video production.

ILCA’s Saul Miller award highlights writing related to some of the key activities of unions: organizing, collective bargaining and political action. The awards honor the late Saul Miller, a director of the AFL-CIO Department of Information and a founder of ILCA.

Here are the awards received by the IAM:

Best Use of Earned Media 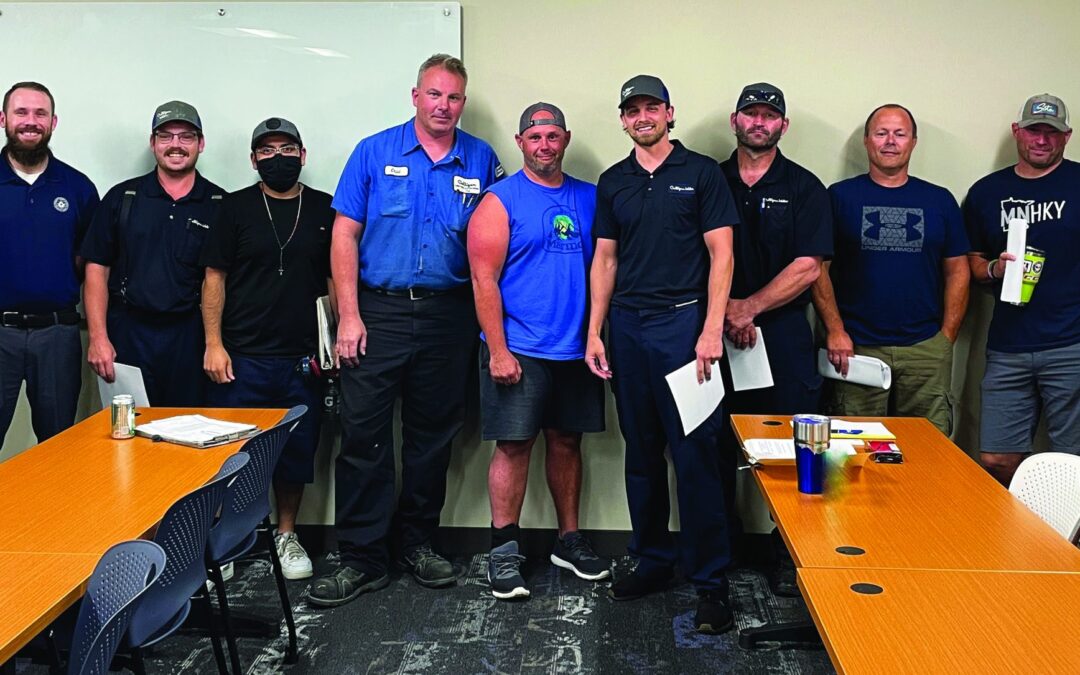 Taking On Two-Tier Wage Scales: Solidarity is the Way Forward

Thirteen years ago, Kyle Lokkesmoe was surfing the internet, looking for a job. He came across a post that caught his eye: Culligan, a global water treatment company in Minnetonka, MN, was hiring for jobs at more than $24 an hour.

He applied and was hired. Lokkesmoe says if he had seen a similar job posting earlier this year, things would have been much different, because the company was advertising lower wages that were nowhere near the wages that attracted him in the first place.

“With the two-tier system, the starting wage is under that and there is no way I would have clicked on the job posting,” said Lokkesmoe.

Lokkesmoe’s story is typical of colleagues who work side-by-side, doing the same job, but earn different wages on two different scales. Whether they’re called Tier 1 and Tier 2 or “A” Scale and “B” Scale, the results are always negative. They create an environment with low morale, resulting in stress and poor attendance.

“It was bad,” said Lokkesmoe, a shop steward at Culligan who was on the negotiating committee this past summer. “We all knew that it had to go away. It was not going to move ahead smoothly if we had a two-tier pay scale in our shop.”

IAM Local 459 members are now celebrating the elimination of the two-tier wage scale at Culligan, but the victory came after a fight for fairness, during which all members stuck together, four years after the divisive system began.

“It showed that we were all in it together, doing the right thing,” said Lokkesmoe.

It all started when the Local 459 Negotiating Committee met with the company last year to negotiate a one-year contract during the height of the pandemic, says IAM District 77 Business Representative Andrew Peltier.

“The company came out during a pandemic and said we appreciate all the work you guys do. We want to give you a 1% raise,” said Peltier.

But when profits took off later in the year, office employees were given a 3% raise, plus a 10% bonus. This created further animosity and lowered morale even more on the shop floor.

“They never really went back and addressed anything with the people that are actually on the shop floor, loading the trucks, delivering the materials to the customers, going into the customers’ houses [in the midst of a pandemic] and installing commercial and residential softeners and products,” Peltier said. “If you didn’t have the people doing this during the pandemic, you wouldn’t have these record profits.”

This time around, with a change in management, the Negotiating Committee had the two-tier wage system at the top of their priority list, in addition to a wage increase. The company compromised, as well, by showing a willingness to sit down at the bargaining table, share financial information and work together to make it happen.

“During negotiations, we were very adamant this had to happen,” Lokkesmoe said. “I think they understood, too. They were having a really hard time hiring anyone on the lower scale.”
Remaining positive helped, according to Peltier.

“We want to see the company stick around and be able to service their customers, be able to produce what they need to produce; however, we also need to be treated fairly,” said Peltier.
Lokkesmoe says he no longer sees animosity on the shop floor between workers.

“The wages are so much more enticing,” said Peltier. “[The contract] also gives them an opportunity to progress within the company and move up from classification to classification.”
Older members with more experience realized that younger members gaining experience needed this change more than themselves. Peltier remembers shop stewards telling him, “we need to make this fair, so we can keep people around, so when we’re ready to step down or retire, we can leave this place better for the people behind us.”

Steigauf said the committee kept negotiations fact-based. The company hadn’t been following the two-tier wage structure anyway, so it was easier to argue at the bargaining table.

“Just really do your homework,” said Steigauf. “Bury them with facts. You can’t argue facts.”

The local ratified the one-year agreement on August 2, continuing the relationship the IAM has had with Culligan since the first contract was ratified on August 8, 1967.

The union may not win every battle against two-tier wages, but the war rages on with continuous and gradual success throughout the Midwest. While all locals fight to eliminate the system in its entirety, others have succeeded in either narrowing the gap or creating a path from Tier 2 to Tier 1, when elimination has proven unsuccessful. IAM Local 387 in St. Louis created such a path when it ratified a new contract with GKN Aerospace in February.

“We thought that if we didn’t try to fix the issue, Tier 2 would be all there was,” said IAM District 837 Directing Business Representative Tom Boelling. “We didn’t want to lose the higher pay scale.”

Boelling said the negotiating committee had to think outside the box with an alternative to Tier 2. The committee proposed a wage structure that used percentages.

The end result was that “the company has to maintain 70% of their employees in the Tier 1 pay scale,” said Boelling. “It doesn’t go by classification; it goes by the total number of employees.”

The union reviews the numbers with the company quarterly to make sure both are on the same page, after new hires and retirements.

“It has been an overwhelming boost in morale in the shop with the 70/30,” said IAM Local 387 President and GKN Plant Chair Joe Blanke. “After two quarters, more than 30 people have moved already. I feel like it’s a viable avenue to get to the top tier scale.”

While committee members went into negotiations with the goal of eliminating the two tiers, they had backup plans in case the company continued to reject the idea.

“Just have a plan, come up with several ideas, so you can see what sticks,” said Blanke. “So if you can’t eliminate it completely, come up with something creative to stop the bleeding.”

GKN had been using a two-tier wage structure since 2012. IAM members saw the effects of the change immediately.

“We were seeing it happen. We were experiencing it right away,” said Blanke, who adds that it’s good for a company to give incentives because it keeps workers around. “We also had an improvement on our wage progression, so the combination of both of those things was huge. They’re going to progress at a higher rate than they did in the past. It’s all about money now. This is another thing that will tie someone to a company. It’s more of a career here, than take what I can and leave.”

“The two-tier wage system is damaging, not only to the worker, but to the company,” said IAM Midwest Territory General Vice President Steve Galloway. “It’s time to end this practice of pitting one employee against another and pay workers what they deserve for their hard work. Bargaining committees about to begin negotiations can use what happened at Culligan and GKN as examples of how not giving up can get workers closer to their ideal contract.”

“Anything is possible,” said Boelling. “Make sure you’re really clear. It might not affect you now, but in the future these things might affect you, so stick together.”

Higher wages take care of the workers and their families who help our world thrive. Negotiations allow members to understand what is at stake and the value of their union, comprised of everyday workers just trying to make a difference in their lives.

Peltier’s mantra is, “prepare for disaster, but hope for the best.”

The post Taking On Two-Tier Wage Scales: Solidarity is the Way Forward appeared first on IAMAW .