President Biden delivered a historic speech from the White House recognizing unions and essential workers for their sacrifices and courage in keeping America moving during the COVID-19 pandemic. The president honored the legacy of the late AFL-CIO President Rich Trumka and took a moment of silence to remember working people who have passed away from the virus.

The president called for the passage of the Protecting the Right to Organize (PRO) Act, legislation that would repeal anti-worker “right-to-work” laws and encourage the formation of unions while expanding collective bargaining rights to more sectors of the economy. Biden also pushed for stronger “Buy American” rules, expanding elder and child care, and passing infrastructure investments and middle-class tax cuts through Congress.

Biden specifically mentioned Machinists Union members and other union members who have worked on the frontlines during the pandemic.

“President Biden has promised to be the most union-friendly president in our lifetime and he has kept his word,” said IAM International President Robert Martinez Jr. “The Biden-Harris administration continues to move a historic pro-worker, pro-democracy agenda that supports and grows the labor movement. Our members will continue fighting to help build back better for our nation’s aerospace, manufacturing, transportation, and all workers.”

“In my White House, labor will always be welcome,” said Biden. “When unions win, workers across the board win. Families win, communities win and America wins. And despite this, workers have been getting cut out of the deal for too long a time.”

Biden’s pro-union address, which was preceded by speeches from U.S. Labor Secretary Marty Walsh and AFL-CIO President Liz Shuler, came after celebrating Labor Day with union workers in his home state of Delaware.

Republican Gov. Greg Abbott recently signed Senate Bill 1 into law after the Republican-led legislative passed it during a special session.

We have a saying in Texas that @GovAbbott and the extremist @TexasGOP will understand. With this anti-democratic, anti-American voter suppression law, they have “sunk so low that we can’t put a rug under them.”

The new law sets restrictions such as banning 24-hour voting and drive-thru voting. The law also restricts officials from mailing unsolicited mail-in ballot applications and sets new requirements for those tasked with helping those with disabilities at the polls.

This is a blatant attempt by Abbott and the radical right to turn back the clock on voting rights when we should be making it easier to vote.

The Machinists Union strongly pushed for the successful passage of the John R. Lewis Voting Rights Advancement Act of 2021  (H.R. 4) through the U.S. House of Representatives last month to fight back against laws just like this one. The legislation would restore key provisions of the Voting Rights Act of 1965 that John Lewis fought for, and put us back on a path toward racial equity in voting.

Martinez, a Texas native, tweeted for IAM members and our allies to lift up “by defeating right-wing radicals at the ballot box and in the courts.”

I urge my fellow Texans to join the @MachinistsUnion , the @TexasAFLCIO and our allies in lifting up our state by defeating right-wing radicals at the ballot box and in the courts. 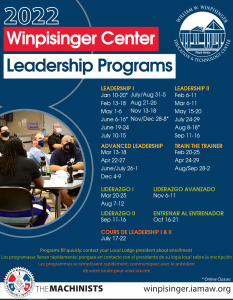 Leadership Programs fill up quickly and members are encouraged to talk with their Lodge Officers concerning the registration and enrollment process. Members must be registered by an officer of their local lodge.

“The IAM places a high priority on the education of its membership,” said Winpisinger Center Director Chris Wagoner. “After attending programs, members return home prepared to make a real and tangible contribution in their Local Lodge, in their workplace, and in the broader community. We look forward to engaging first-time and returning participants in 2022.”

Questions about the registration process, travel, and enrollment status should be directed to Donna Hudson at 301-373-8820.

“This was not only a great way to help out the kids, but also our community,” said Gwen Tracer, Local 1045 Secretary-Treasurer. “This project got the membership looking around to see where we could help more. With the new wave of the virus, fundraising has almost come to a halt, so we have looked into donating where we can, like the Algona Fire Department and the Exceptional Opportunities disability program of Algona, IA.”

“This donation was yet another example of our members supporting and giving back to the community,” said IAM Midwest Territory General Vice President Steve Galloway. “The Midwest Territory has put increased importance on serving the communities where we work and live. My gratitude goes out to Local 1045 for finding ways to make a positive impact by aiding these students.”

The IAM Midwest Territory, along with their Districts and Locals, has hosted more than 20 “IAM H.E.L.P.S. in the Community” events, with more than 450 volunteers across the Territory, to date. Each District and Unaffiliated Local is tasked with hosting at least one event per year. For more information on the IAM Midwest Territory’s “IAM H.E.L.P.S. in the Community” program, click here .

“Sister Fuentes brings a wealth of knowledge, experience, and a strong work ethic to her new role as a Grand Lodge Auditor,” said IAM General Secretary-Treasurer Dora Cervantes. “I welcome her to our team of Grand Lodge Auditors and know Mariaelena will be a tremendous help to our Local and District Lodges throughout her assigned zone.”

The appointment is effective September 1, 2021.