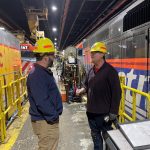 While in Chicago, Hartford and Jacobs visited members at Amtrak and met with several new members who are excited to be a part of the IAM and Local 2600.

“I am proud to be a member of the IAM,” said new member Dave Steffan. “The IAM is the strongest union at the Chicago Shop, and our leadership really looks out for us.”

Hartford and Jacobs also met with Soo Line Railroad (SOO) members to discuss the tentative agreement that will be out for membership ratification soon. The members had great questions and were thankful for the visit.

“Our members do a great job ensuring Chicago commuter rail riders are safe,” said Hartford. “Our members make sure the traveling public is able to get to their destinations on time.”

At the same time, IAM Special Representative for the Rail Division Derrick Battle and District 19 General Chairman Kenny Krause met with the approximately 80 CSX Traveling Roadway Mechanics in Jacksonville, FL for the annual “startup” meeting. These members work on various systems and regional tie and rail gangs across the entire 26-state system.

Meetings were also held with CSX Labor Relations to discuss changes to the travel allowance and per diem negotiated by the IAM Rail Division and District 19 in the last round of national bargaining ratified by the membership late last year.

“The work these members perform repairing and maintaining the equipment used to install and replace rail and ties are essential to CSX’s ability to keep trains moving efficiently and safely,” said Battle. “These members spend a lot of time away from home to do their jobs and the IAMAW Rail Division and District 19 are committed to working with CSX to improve the travel allowance and per diem that these members truly deserve.” 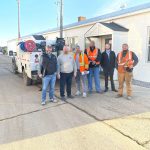 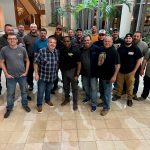 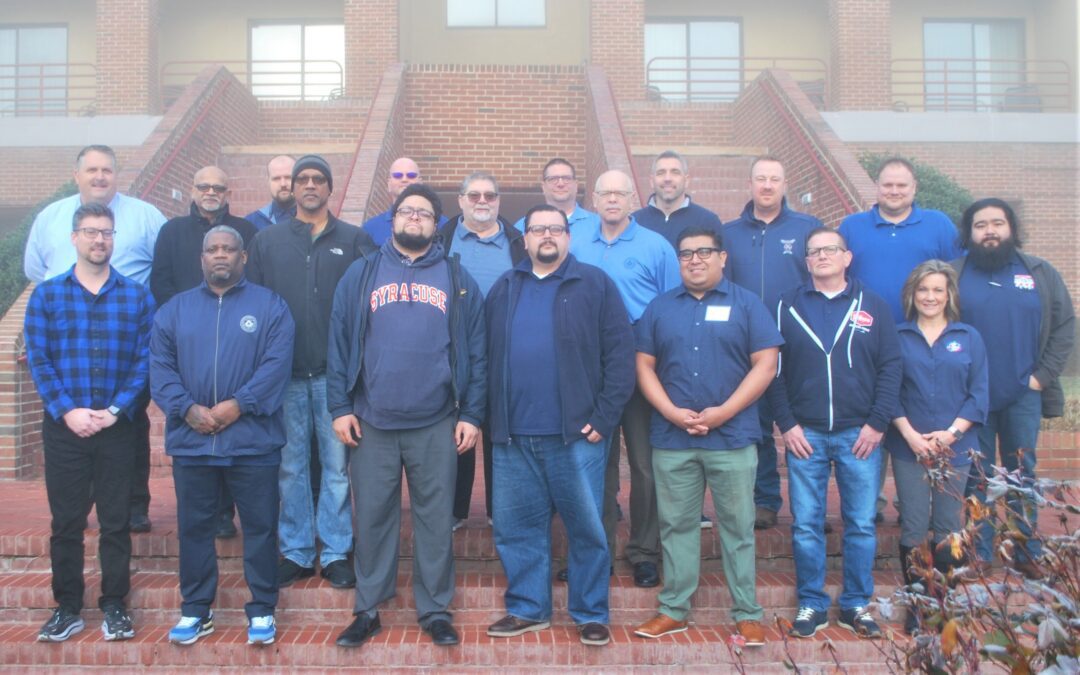 Be More Than a Bystander: IAM Adopts Training to End Workplace Violence and Harassment

A group of 19 IAM staff members from every territory and multiple districts attended an impactful three-day train-the-trainer course of the Be More Than a Bystander program, conducted by the Canadian group Ending Violence Association of BC in partnership with the BC Lions and BC Centre for Women in the Trades at the William W. Winpisinger Education and Technology Center.

The Be More Than a Bystander program is designed to inform participants about how to recognize workplace harassment and violence, specifically against women and the LGBTQ+ community, and how to appropriately intervene to help someone.

“The course is about teaching men how to be better brothers to our sisters in the labor movement, pushing back against gender-based violence and harassment, specifically in the workplace, and how to intervene meaningfully,” said IAM Eastern Territory Special Representative Andrew Hounshell, who attended the training and will now teach the course to IAM staff and members.

The IAM is the first labor group in the United States to be trained in the Be More Than a Bystander program.

“It was very impressive,” said Hounshell. “I’m looking forward to going out and sharing the information that we learned to help improve our organization.”

The objective of the program is to help men understand the impact of gendered violence in the workplace and the role they can have in speaking up.

“It was an honor for me to observe the first Be More Than a Bystander Program,” said IAM Women’s and Human Rights Director Julie Frietchen. “I found it informative and think that we will be able to use this material to make our union even more inclusive and stronger than ever.”

“‘Justice on the job and service to the community’ is the Machinists’ motto,” said Frietchen. “Part of fulfilling the commitment to our motto is to be a better ally to all of our members. I am excited for the opportunity we have.”

Be More Than a Bystander – Photo

The post Be More Than a Bystander: IAM Adopts Training to End Workplace Violence and Harassment appeared first on IAMAW .

“Unions are essential to holding corporations accountable for the wage inequities between workers and CEOs and unfair treatment,” said IAM International President Robert Martinez Jr. “If corporations are allowed to deduct union-busting expenses and other anti-union activity, then it’s only fair that workers should be able to deduct dues expenses for their pursuit of improved wages and benefits.”

“Our members are troubled the 2017 Tax Cuts and Jobs Act eliminated the longstanding tax benefit for unreimbursed workplace expenses, and workers are especially frustrated the law forbids them from deducting their union dues payments,” reads the letter.

In 2017, the Tax Cuts and Jobs Act (TCJA) was enacted, which stated that workers couldn’t deduct the cost of the union dues they pay to support their unions.

“The IAM places a high priority on the education of its membership,” said Winpisinger Center Director Mary McHugh. “After attending programs, members return home ready to contribute to their Local Lodge, in their workplace, and in the broader community. We look forward to engaging first-time and returning participants in 2023.”

Officers can register participants for Leadership I, Leadership II, Advanced Leadership, and Train-the-Trainer using the web-based registration link in the call letter. The same link can be used to register for the online versions of Leadership I and Leadership II.

Leadership Programs fill up quickly and members are encouraged to talk with their lodge officers concerning the registration and enrollment process. Registrations must be submitted by a lodge president, business representative, or general chair. No member or officer is permitted to submit their own registration.

Questions about the registration process, enrollment status, and travel to the Winpisinger Center can be directed to Registrar Donna Hudson at 301.373.8820.

This week, IAM Locals 1871 and 1782 (District 141) members joined AFA-CWA flight attendants and Teamsters mechanics to stand in solidarity with ALPA pilots for an informational picket at San Francisco International Airport. IAM Air Transport General Vice President Richie Johnsen was at the informational picket to show the support of the entire IAM.

“United Airlines is touting how much they’re investing in this company,” said Johnsen. “They haven’t invested in their most valuable asset–their employees. It’s time to take care of your employees.”

The IAM and other unions at United Airlines recently formed a bargaining coalition to strengthen employees’ voices in their workplace and coordinate closely on bargaining and other issues.

Today, front-line union workers at #UA came together at #SFO Airport for an info picket, calling on the #UA to return to negotiating. IAM Members on the West Coast stood in #SOLIDARITY w/ @ALPAPilots @afacwa @iamairtransport @Teamsters to create a rock-solid, unified front. pic.twitter.com/TNeQaDAeb2

Save the Date: IAM Unity and Growth Conference to be Held in August 2023

The 2023 IAM Unity and Growth Conference will train, educate and inspire IAM officers, staff, activists, and other leaders to organize new members in all sectors and continue to embrace and strengthen the diversity of our union. Morning plenary sessions will feature dynamic speakers and panels, while afternoon breakout sessions will include instruction on fresh organizing tactics, and how communications, strategic research, legal matters, and diversity can help grow our union.

Delegates will also convene in individual industrial sector meetings to discuss, review, and produce a proactive, strategic organizing plan. Each sector will give a report to the full conference.

More details and registration information will be posted and sent to Lodges in the coming weeks.

The post Save the Date: IAM Unity and Growth Conference to be Held in August 2023 appeared first on IAMAW .