Fighting for Fairness in Niagara Falls 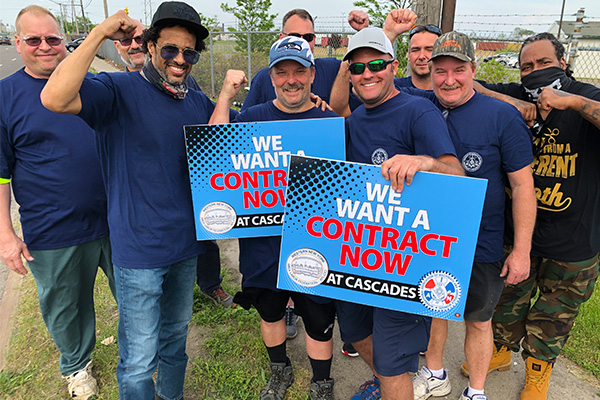 The chant of “contract now” could be heard over the roar of the wind, the rush of passing cars and occasional horn-honking as new Machinists Union members employed by Cascades Containerboard in Niagara Falls, NY, rallied for a first contract.

The rally was held by IAM District 65 for the 115 workers who voted to join the IAM more than two years ago in April 2019. The election was certified by the National Labor Relations Board (NLRB) in June 2019.

Cascades Containerboard, a Quebec-based packaging manufacturer, had a robust 2020 fiscal year with sales of more than $5.1 million. Workers are trying to gain respect and dignity on the job after years of internal non-negotiation, mismanagement and outright disrespect.

Despite draconian efforts by the company to divide them, workers at Cascades are standing together in their fight for a first contract. Instead of splitting the members, the divisive tactics of the company had the opposite effect—workers are more unified than ever.

“It brought everybody together,” said Chief Steward Shawn Reed. “Maintenance and production are all one team now. We work together, stand together and have each other’s back. It’s no longer about individuals. Now it’s about the team.”

The company has responded to the organizing by permanently sub-contracting their work, resulting in layoffs and a reduction of annual profit-sharing by 20 percent. In addition, the company forced employees on both day and night shift to work rotating 12-hour shifts – three days on and two days off followed by four days on and three days off.

During this time, the Machinists Union filed numerous Unfair Labor Practices (ULP) on the workers’ behalf. The union prevailed in every charge, only to have the company appeal the decisions, all of which were ruled in the union’s favor again.

Unfortunately, Cascades has promised to appeal yet again, further tying up the process, and, without any actual enforcement, the National Labor Relations Board (NLRB) is powerless to enforce violations.

“We made sure the workers were prepared,” said District 65 Directing Business Representative Ron Warner. “A strong in-plant organizing committee is the glue that holds the campaign together as the unionization process moves forward. Cascades workers stood strong. The workers understood that they are the union. It is the employees – the people themselves – who put the ‘drive’ into an organizing drive.”

Cascades had hired the notorious union-busting law firm Jackson-Lewis in an unsuccessful effort to thwart the unionizing campaign. The company subsequently hired another firm, ironically called the Labor Relations Institute, to stall contract negotiations once the workers voted to form a union.

“The union busters are a mercenary, a hired gun,” said District 65 Business Representative Rick Dahn. “They are there to create fear and confusion. We made sure that our members were better trained, more knowledgeable about the workplace, more persuasive, more credible and, most important, more respected than the employer’s representatives. It takes work, but the rewards have been great.”

Reed says workers have stood strong, keeping the goal of a union contract in mind every step of the way.

“The only way we can ensure that we have a voice in the company and have equal rights across the board is with a union contract,” continued Reed. “We’re really looking for job security, a level and fair playing field for all workers, respect and a chance at a family-sustaining generational job that we know we can achieve through a collective bargaining unit and unionization. Workers here have children that are also employed at Cascades.”

The next day after the rally outside the Niagara Falls plant, Higgins wrote to the president of the company, urging him to “negotiate in good faith to reach an agreement expeditiously.” Machinists union members also got the backing of two political heavy-hitters when U.S. Senate Majority Leader Chuck Schumer (D-NY) and U.S. Sen. Kirsten Gillibrand (D-NY) called on Cascades to negotiate in good faith and reach a first contract with the union negotiating committee.

“I am so proud of District 65 and these members at Cascades Containerboard for standing strong for the betterment of themselves, their families and their community,” said Bryant. “We have and will continue to use all resources necessary to achieve justice on the job for these Brothers and Sisters. We are on the right side of this fight and, ultimately, we will prevail.”

The fight at Cascades shows the urgency of labor law reform, such as the Protecting the Right to Organize (PRO Act). The legislation, which restores fairness to the economy by strengthening the federal laws that protect workers’ right to join a union, was passed by the U.S. House but is currently stalled in the Senate.

The bill stipulates that first contracts between companies and newly certified unions be settled within a few months, and if no agreement is reached within that time, requires mediation and arbitration instead of continuing stalling, as in the case with Cascades Containerboard.

As the IAM fights for a fair contract at Cascades and a fair shake for all workers with the passage of the PRO Act, workers at Cascades remain committed.

It’s about the future of the community for many workers at the plant, including Phillip Cairns.

“I want a job that I can stay and retire from, that’s what I really want from Cascades,” said Cairns. “I have two small kids, and security is important, that’s what I’m looking for – job security.”

The post Fighting for Fairness in Niagara Falls appeared first on IAMAW .