Fighting for Workers this November 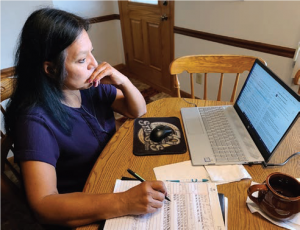 Organized labor and working families have taken a lot of abuse at the hands of politicians in the form of failed policy and anti-worker legislation over the past few decades. Many IAM members in the Midwest United States have felt that punishment more than other parts of the country. Whether in the form of “right-to-work” laws in Wisconsin, or trade legislation failing to prevent factory closings in Minnesota, workers are being let down by the officials elected to advocate for them.

Members in the region understand the challenging relationship between organized labor and politics. This election season, IAM members of the Midwest Territory are volunteering their time and working to get pro-worker candidates elected in hopes to turn things around.

“The consequences of elections and how they can adversely affect working families can undoubtedly be felt right here in the heartland of our country,” said IAM Midwest Territory General Vice President Steve Galloway. “Some of our members believe they are just voting for Donald Trump – the man. But what they are really voting for is an entire administration. An administration chock-full of his anti-worker, anti-union appointments – people like anti-worker Labor Secretary Eugene Scalia, anti-public education Secretary Betsy DeVoss, the Mnuchins, the Millers, the Kushners and one or two Supreme Court Justices. We must educate our union brothers and sisters on choosing the right candidates to lead this country. Candidates of dignity and respect for the working class. Candidates that will fill their administration with pro-worker appointees.”

IAM members in Wisconsin have had plenty of battles with their elected officials over anti-worker legislation. The famous 2011 fight over then-Gov. Scott Walker’s anti-union Act 10, a budget bill that greatly limited the power of public sector unions was one for the ages as union members packed the capitol in protest for months trying to keep the bill from passing.

IAM Local 873 member Yolada Pillsbury is no stranger to working elections, as she’s been volunteering for nearly 15 years.

Although Yolanda Pillsbury had been politically active before then, participating in those protests really ignited a fire in the IAM Local 873 member.

“I went to Madison on several occasions for rallies, and even got to speak at one of them,” said Pillsbury. “It was a very exciting time for me to learn and understand what some of our elected officials think of us and our union.”

She is taking time away from her job at John Deere in Horicon, WI and working to help get worker-friendly candidates elected.

“Those experiences keep me doing what I do today,” said Pillsbury. “They give you a great sense of what the union movement is all about. You fight for what is right for your members, whether they understand it or not. You know in your heart, that we need to continue to support candidates that will do the best they can for working people.”

In 2015, Gov. Walker and the Wisconsin legislature eventually passed right-to-work for all employees of the state, something the IAM and other unions hope to reverse in the very near future.

Kai Duus is a four-year member of IAM Local 459 who works for the Metropolitan Council, the body that oversees transit, housing, parks and wastewater treatment in the Minneapolis/St. Paul region.

Duus has been interested in politics since he was a teen­ager. His father encouraged him to attend a party caucus when he was 16 so he could see the democracy in action.

“If you want the system to work, you have to participate,” said Duus.

He feels it’s important to volunteer to help get pro-labor candidates elected with hopes to breathe some life back into the labor movement.

“Working people are under attack,” said Duus. “Companies want to get more for less. If you don’t get elected officials to protect your rights as a worker, you’re going to be working for less and less. If you want to keep a decent wage and a nice way of life, we have to be active and volunteer to get people who share those same views.”

He also believes working families have a lot at stake in this, and every election.

“Healthcare, paid time off and living wage issues are all working people issues in our state that need to be addressed,” said Duus. “It’s too easy to outsource jobs. Unions have lost a whole bunch through the years – what we can do on a strike, when we can strike – we’ve lost a lot of tools we can use to battle employers who don’t want to provide a safe working environment with a living wage and benefits.” 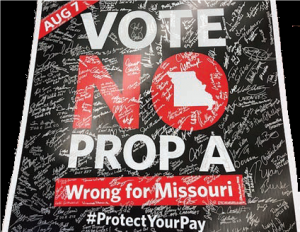 Missouri union members have their own experience fighting right-to-work in their state. In 2017, unions in Missouri were forced to spend millions of dollars to fight back “Right-to-Work” after then-Gov. Eric Greitens made it part of his anti-union agenda and one of the first pieces of legislation passed when he took office. The IAM, joined by the labor community, gathered signatures and put right-to-work on the ballot as a statewide referendum, Proposition A, and it was defeated by a huge margin in 2018.

The battle to overturn RTW in Missouri united working people of the state. However the amount of resources it took to defeat Proposition A could have been better used elsewhere had the law never been passed in the first place. That’s what 11-year IAM Local 837A member Chad Stevenson hopes to explain to potential voters.

“In Missouri, we are doing everything we can to carry our momentum from the right-to-work win into this election,” said Stevenson. “We have to let everyone know if we don’t elect union friendly candidates, it’s going to undo all the hard work we put in and progress we made.”

The fourth-generation union worker Stevenson believes the Prop A campaign helped union members make the connection between elections and the impact they have on their workplace.

“People are more open minded and focused on the issues, rather than just punching a party ticket.”

He often talks to his coworkers about the importance of the Missouri governor’s race, and how it can affect their jobs and their families.

“Our union contract at Boeing is going to be up in 2022. Who is in office could have an impact on how that goes,” said Stevenson. “One wants ‘right-to-work’, the other doesn’t. We don’t need to be wasting our time fighting ‘right-to-work’, we need to be focused on our contract. It’s important to grow our membership and strengthen what we already have.”

Unlike years passed, volunteers are facing a huge hurdle in the form of COVID-19 when it comes to contacting members about the upcoming election. In the times of a global pandemic, conventional ways of reaching potential voters, like door knocking and canvasing, are not considered safe. 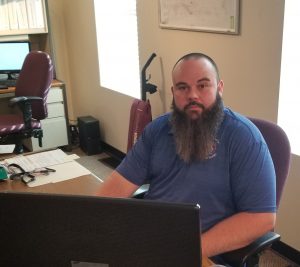 “We have to let everyone know if we don’t elect union friendly candidates, it’s going to undo all the hard work we put in and progress we made.” – Chad Stevenson

“I feel bad we can’t have those face to face conversations with people,” said Pillsbury. “I like canvasing, it’s nice to talk to people and hear what’s going on with them. But we still need to contact our members, it’s just tougher to make a connection with people.”

This election season, Duus plans on doing a lot more phone banking than in years past.

“It’s going to be difficult, a lot of people won’t answer if they don’t recognize the number,” said Duus. “I believe the younger generation will be making the difference this election. Not sure if they understand the importance of unions. That’s why we have to work hard to get our message out.”

“Two of our biggest tools is rallies and house calling and we pretty much can’t do that,” said Stevenson. “Rallies are great, we meet in large groups to help educate people. That way people can get the same message at the same time.

“We will have our challenges, but we will just have to focus more on phone banks this time around. Maybe do more literature drops as well.”

Campaign in a Box

Since campaigns to educate voters look quite different in the year of coronavirus, organized labor must adapt to these changes. Less door knocking and more phone banking requires a shift in resources. One of the adjustments is the unique “Campaign in a Box” being used in every state throughout the Midwest Territory.

The hard sided Pelican boxes contain 10 Samsung tablets preloaded with campaign software that can be used to call union members. The boxes have everything needed to set up a call center, including a network router, power chargers, single use headphones and disinfectant wipes.

The software is simple to use and can be taught to users in a matter of minutes. The campaign in a box can be taken to location and be ready for use in 10 minutes. Having a campaign in a box is helping increase the number of people reached and making the best use of IAM resources.

While phone banking will be a large portion of the volunteers’ efforts, it won’t be the only thing they will be doing. There will be a lot of literature drops to members at plant locations and union halls, along with the distribution of door hangers to members’ homes.

“Union membership has been on the decline for decades,” said General Vice President Galloway. “Union favorability, on the other hand, is increasing. Pro-labor legislation is desperately needed in the U.S. in order to bring union representation to those who need and want it. The only way that can happen is to elect representatives who see the value of union membership and working people. Members in the Midwest Territory and all across the country are volunteering countless hours this election season to make that a reality.”

The post Fighting for Workers this November appeared first on IAMAW .