GPS: The Driving Force of the Western Territory 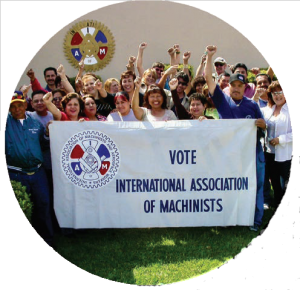 In 1888, under the cloak of darkness, Tom Talbot and 18 of his machinist peers gathered in a railroad pit near Atlanta and signed a document that would change the lives of millions. It was the moment the International Association of Machinists and Aerospace Workers came to life.

Since then, the IAM has evolved year after year, creating a better standard of living for working people and their families, giving them the tools needed to achieve the American dream.

But in an ever-changing world, that’s easier said than done.

In 2009, when Gary R. Allen was elected by acclamation, and then became the General Vice President of the IAM’s Western Territory, he knew he needed a strategy to pave the way for the future of the IAM and the labor movement. He had to look after more than 60,000 machinists across 13 states in the largest of the IAM’s territories in the United States. He asked himself, how did he want the territory to evolve?

Allen knew he was fortunate to inherit a solid foundation laid in place by his predecessors. The cornerstone they left became the bedrock of his plan which is known today throughout the Western Territory as “GPS,” which stands for growth, prosperity and strength—a metaphor for his vision.

“We came up with this motto of GPS,” explained Allen. “Growth is at the foundation which is organizing, prosperity through collective bargaining and strength which is derived from servicing. We sharpen the saw every single day on all three of those points.”

But the simple acronym GPS hides the intricate nature of this strategy and what the territory has accomplished.

The heartbeat of the Machinists Union has always been organizing. It’s the lifeline to help the hardworking men and women of this country succeed. The people who believe in collective bargaining share similar stories of fighting injustices and taking on bullies which led them to labor’s door. For IAM District 725 President/Directing Business Representative Larry Olinger, the reason he became involved was simple.

“I like to help people,” said Olinger. “Getting a better standard of living and giving them a voice in the company. I got hooked, I loved it.”

Three decades later, that sentiment holds true. The need to help others made him a perfect fit to oversee District 725, which has served as a prime example of how GPS is working. When he took over in 2013, he put the plan in place immediately.

“Seven years later, we are up to 8,400 members now and we went from 64 contracts to 130. We’ve done a lot of organizing, a lot of work, a lot of educating our members,” said Olinger. “Over the last four or five years, we have been the top organizing district in the Western Territory. Not because we are better than anyone else, it’s because we don’t take no for an answer.”

“Organizing is the most fulfilling thing you can do because you take a group of people who are really getting marginalized or beaten up, you bring them together, give them tools, give them a contract and improve their lives. You see the change when they start believing in each other and the union,” explained Allen.

The tenacity of Olinger and his staff has paid off but their success stems from the culture created by the GPS plan.

“We try to cultivate a positive culture and positive outlook toward organizing. Organizing is the hardest thing we do,” Allen explained.

“We have to want to organize. We have to want to help somebody,” added Olinger. “So if you don’t have it in your heart and you’re told to do it, you aren’t going to do a good job and it’s going to be hard to share with someone else and convince them it’s a good thing to do.”

No one prospers if we aren’t equal. That’s always been the mantra of the Machinists Union, even when it wasn’t popular opinion. An IAM contract levels the playing field for wages and rights, but Allen’s team took it a step further, making sure everyone’s voice counts when it matters most.

“It’s time for us to make room for women in leadership roles in every place of our union and replicate that every­where,” said Allen passionately.

In 2016, the machinists at Local 1930 working for the City of Long Beach, CA were in contract negotiations. A majority of the group felt overlooked, so they turned to Allen with a request.

“Our unit is 80 percent women and they came together and told me that they didn’t think their voices were being heard. They said, ‘we want a women’s committee,’” Allen remembered clearly. “We gave them the resources, we gave them the space, we stepped back and they have done a marvelous job.” 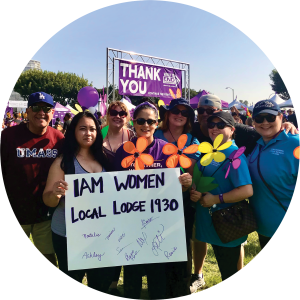 Members and friends of IAM Local 1930 Women’s Committee participate in the Walk to End Alzheimer’s fundraiser in Long Beach, CA.

Machinist member Natalie Gonzalez, a founding mother of the committee, realized quickly how important this committee would become.

“For a lot of people, that was the first time they started to get involved and it was the nexus for the information or for the connection to the lodge as a whole,” said Gonzalez. “The women that were coming finally had a space where they could share what was going on and they felt they could participate in a union setting.”

Since then, the group has exemplified the sort of pros­perity that can be achieved through equality.

Since its inception, the committee has made a difference for the local and the community. From family picnics and socials to supporting women’s homeless shelters and backpack giveaways, the women lift the voices of their union family. Like Allen, they believe that unity comes from everyone.

“I’m very grateful for having the committee and meeting so many great labor women who are active and passionate about public service,” said Mejia. “We are all public servants at work and not only are we serving our residents at our jobs, but as union members, we are also making sure that we are fighting for a better living wage for everyone.” 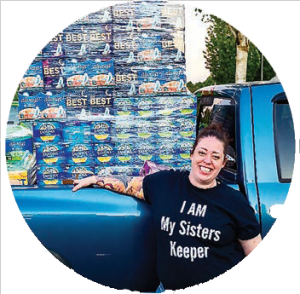 IAM member Jessica Deming of Local 63 in Portland, OR is a wife, animal lover, machinist and an activist. Being union was a family value she learned early on.

“I think the first picket line I was on, I was 12 or 13. We were picketing for Fred Meyers. It was crazy! People were yelling at you, positive and negative, and I remember being really confused,” said Deming. “That was one of the coolest conversations I ever had with my dad. He explained to me that just because you are fighting for the little guy to make things better, that doesn’t necessarily mean the reaction you’re going to get is going to be positive. Unions take the hits but they keep fighting for the right thing.”

When she received her union card, she knew she was home. The Machinist Union values aligned with her own. Deming understood quickly that the IAM’s strength came from its diversity.

“Diversity better represents our people. As a leader, if I am just getting one voice, I am missing a whole bunch of other voices. All their opinions count. Without them, we are weak. With them – that’s what makes us strong,” said Kleiboeker passionately.

When Jessica wanted to start a program collecting menstrual products for donation to a LGBTQA homeless shelter, Kleiboeker

didn’t miss a beat asking how the local could help. Or when the young machinists at Local 63 desired to start a Christmas drive for teenage foster kids, again he was onboard. 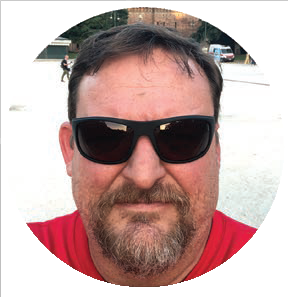 Kleiboeker knew, the more voices, the better. And since diversity is a keystone of the territory, he and his crew are always raising the bar for inclusion.

“Diversity is what makes us strong, not weak. For me as president, having many walks of lives involved in giving me an opinion allows us to better represent our people,” explained Kleiboeker.

Deming called it a no-brainer to bring groups of people who aren’t properly represented into our union family. It’s what Fighting Machinists do. This parallels the values of Allen’s vision.

“We are all humans. We all need to respect each other’s place in this society. No one has a corner on morality or knowledge,” Allen stated absolutely.

It’s an evolution that starts at the top in the Western Territory. Allen is humbled by his four decades as a Machinists Union member. He’s proud of the work that’s been done under the GPS plan, but even more honored by those who have implemented his strategy and changed the lives of millions. Just as Tom Talbot and his warriors did so long ago.

“Joining the union is right up there with my daughters being born, graduating from the U.S. Marine Corps boot camp and receiving my Journeyman’s card. The Machinists Union has done so much for my family over the years I can’t even put into words,” remarked Kleiboeker proudly.

The post GPS: The Driving Force of the Western Territory appeared first on IAMAW .