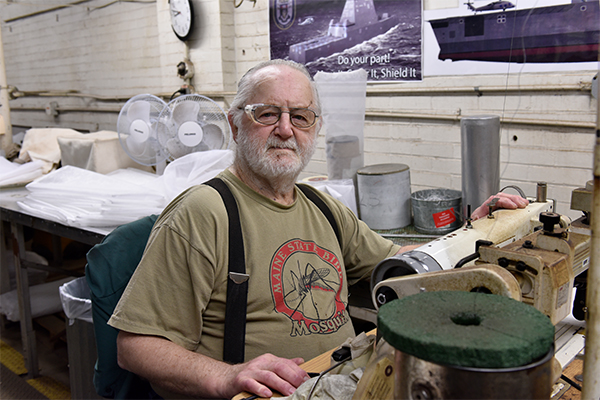 The IAM mourns the loss of a Bath Iron Works (BIW) icon, Clayton Grover. The Local S6 member passed away at 87 on October 4, 2019 after a brief illness.

For nearly seven decades Brother Grover has reported for duty at BIW, often saying that he continues to work “because I still can,” and that “it keeps me going” while adding “I don’t want to retire, and become a couch potato.”

Like many young men of the era, at 19 he followed his father into the shipyard in 1952 going to work as a pipe coverer. In January 1953, he joined the U.S. Army during the Korean War, serving until January 1955, then returning to work at BIW. Sixty-seven years later he was the oldest employee at BIW, working in the same department he started in making flushing bags for the ship’s piping.

Grover was presented with his 60-year pin and certificate while in the hospital with friends and IAM representatives by his side.

Grover was a proud member of Local S6, and would often say that the “union, no doubt had improved the working life” for everyone working the shipyard. A native of Maine, Grover married his beloved wife Shirley in 1956, who passed in 2016.

“Brother Glover was a truly dedicated worker, and union member,” said IAM District 4 Directing Business Representative Rick Compher. “Our deepest sympathies go out to his family, friends, and his extended union family throughout the shipyard, he will truly be missed.”

“Men and women like Clayton Grover helped build this country,” said Eastern Territory General Vice President Jimmy Conigliaro Sr. “They are the workers that gave rise to the working class, joining unions to build better jobs, with better wages, fighting for healthcare, expanding coverage to vision care, and dental. We owe Brother Grover, and those like him our sincere debt of gratitude.”