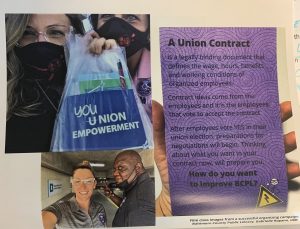 The images, which also include IAM Grand Lodge Representative Bridget Fitzgerald, lead organizer of the BCPL campaign, and IAM Organizing Special Representative Chris Casteel, are from a “Life of a Union Organizer” project Rogano completed during her summer 2021 labor in film class.

“The images featured in the 2022 SUNY Empire State College Calendar are still shots taken from a film I created while working to help unionize Baltimore County Public Library (BCPL) workers,” said Rogano. “This was a successful campaign bringing in over 400 new members to the IAM. It’s no easy feat to create a film, in a month, while only using a cellphone, but with the support of the Organizing Department, I reached my goal. I am overjoyed to have this success featured in the 2022 calendar.”