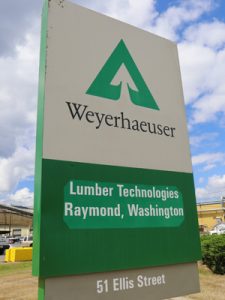 Living in a town with fewer than 2,000 residents, it is safe to say that Shawn Clevenger might not belong in the big city. The IAM Local W130 shop steward resides in South Bend, WA, and works as a plant handyman at the Weyerhaeuser lumber mill in neighboring Raymond two miles away, which is not much larger.

Fellow Local W130 member Mike Milbert relocated from a nearby non-union mill to Raymond about a year and a half ago, and works as a millwright. He and his wife have two children. They just found out his wife is pregnant with their third. He chuckles a little at the thought.

“They’ll be eight, four and newborn, so spread out four years apart,” Milbert said. “It’s a wonderful place to live, to raise a family and to work.”

Working in an industry that has gone through turbulent changes, both men understand the significance of the forest region in which they live.

“We are located right in the heart of some of the best timber in the world, so our travel margin for logs is fairly reasonable,” said Clevenger. “When they harvest a tree, they plant three or four more to replace it, so it’s very sustainable and renewable.”

“There’s timber for miles as far as you can see, which for us working in a sawmill means the future,” said Milbert. “There’s always going to be a need for logging and sawmills and wood products. You can look out and see years and years’ worth of future work to come.”

As military veterans, Clevenger and Milbert are members of a group of men and women gaining more recognition at work, and in the IAM.

Milbert served on active duty in the U.S. Army from 2006 to 2012. His grandfather and father served before him. Milbert spent 28 months in Iraq as a forward reconnaissance cavalry scout, and saw plenty of front-line action… 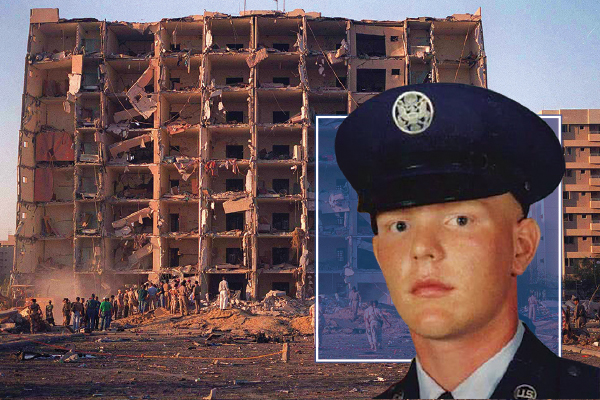 Clevenger enlisted in the U.S. Air Force’s delayed entry program as a junior, and in June of 1991 he graduated from high school

“On my mother’s birthday, August 27, I left for basic training,” he recalls. “In 1992, after all my schooling was over, I was stationed near Fairbanks, AK.”

After subsequent posts in South Dakota and Idaho, he headed overseas. In June 1996, Clevenger was stationed in Khobar, Saudi Arabia, when a truck bomb detonated outside an eight-story housing complex used by coalition forces assigned to Operation Southern Watch. Nineteen U.S. Air Force personnel were killed, and nearly 500 people were wounded. Clevenger ended up in the hospital with multiple wounds.

“It was something you would never want to relive. I had shrapnel injuries all over my body. Behind my knee you could see the tendon where the glass had cut me,” he remembers. “I have some nerve damage in my legs and I have some disc issues in my back from being blown through a wall. I have anxiety issues and PTSD from that. And I’ve just recently been diagnosed with sleep apnea. So, I’m like an old man now.”

Clevenger received a Purple Heart as a result of his injuries.

Decades later, Clevenger moves throughout the saw mill like any other 46-year old might. He handles his work and union activities without drawing attention to what he endures each day. Like many of his fellow veterans, he would rather focus his attention on others, and he is hoping to get more involved through the IAM.
“I’m really looking forward to being able to help other veterans in the union, and being a bigger part of the union ‘pie’ so to speak, so we can get help to the people who need it,” Clevenger said. “The union taking care of veterans and recognizing them brings me to something that really, really surprised me.”

He pulls off his hardhat and turns it backwards. On it a large sticker is affixed reading: #MI22ION. 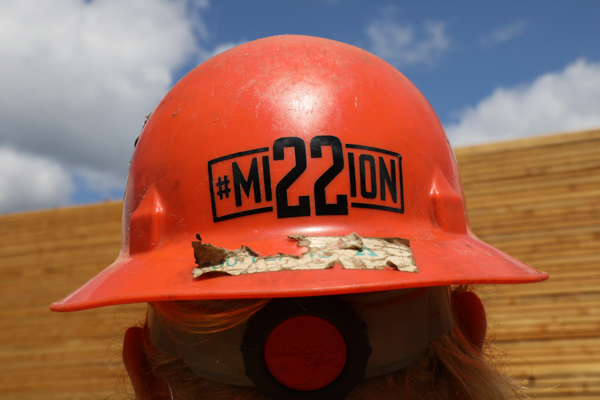 “When I heard about this non-profit called Mission 22, and that 22 veterans commit suicide each day, I felt this is something people really need to hear,” he composes himself before continuing. “It doesn’t matter if you’re a veteran or you’ve never served. One is too many when it comes to mental health and suicide.”

Mission 22 was founded to fight the increasing suicide rate among veterans through public awareness and treatment for Post-Traumatic Stress Disorder and Traumatic Brain Injury.

For most civilians without military service, there is no way to comprehend the struggles a veteran may face, and every veteran’s story is unique. But a fellow veteran might be able to relate. There is an unspoken bond.

“I don’t know if I could actually find the words to actually explain what it’s like without being there,” said Milbert. “When you find out that somebody is a veteran, you automatically have respect for that person because you know they’ve already sacrificed. You know that they’ve already stepped up to a degree.”

Compared to other unions, the IAM has one of the highest percentages of veteran members in its ranks. To assist those members, the union established the IAM Veteran Services Department. Comprising veterans, it conducts classes at the William W. Winpisinger Education and Technology Center each year and can direct members and family members to an ever-growing list of resources and organizations.

“With what the union is doing with the veteran advocate program, that’s going to be another outlet for people to get help and benefits in order to be recognized,” said Clevenger. “Hopefully this will turn into something really great, and other veterans can get good assistance.”

As part of his ongoing advocacy, Clevenger hopes to enroll in the union’s veterans’ program in the near future, and to find new tools to help fellow returning warriors in his community and at work.

“In the union, you’re treated as a family, as part of the team and that’s the way the military works,” said Milbert. “To bring in more veterans is not only is showing respect to them for what they’ve already done, but it also gives them an opportunity to keep moving forward. It kind of gives them a purpose.”

Local W130 member Brian Sherman brought his Marine Corps training, and subsequent civilian experience in Afghanistan, to his job as an electrician at the plant.

“I was a high voltage electrician at Kandahar, which was one of the main U.N. bases. I did quite a bit of work on some of the outposts within Afghanistan, and that was exciting,” said Sherman. “I think a lot of employers are really starting to realize that they’re very dependable people and they’ve had really good training, and they want them on the team.

“With the training you receive in the Marine Corps, or any branch of the service, there’s a lot of discipline that really isn’t taught in the outside world,” Sherman concluded.

“The work ethic that you get from veterans from their military service, it shows in their work,” Clevenger added.

The veterans working in Raymond are but part of the IAM’s ranks of heroes. Across North America, those who have served deserve our respect. Many carry visible scars of injuries healed, but some invisible wounds persist.

“My drug of choice when I have issues from my service is to just go out into the woods and be with nature and just listen to all the different sounds that are natural and organic,” says Shawn Clevenger. “It’s better than any video game or sitting in front of any television. Because that’s where my work comes from. And I just feel at home.” 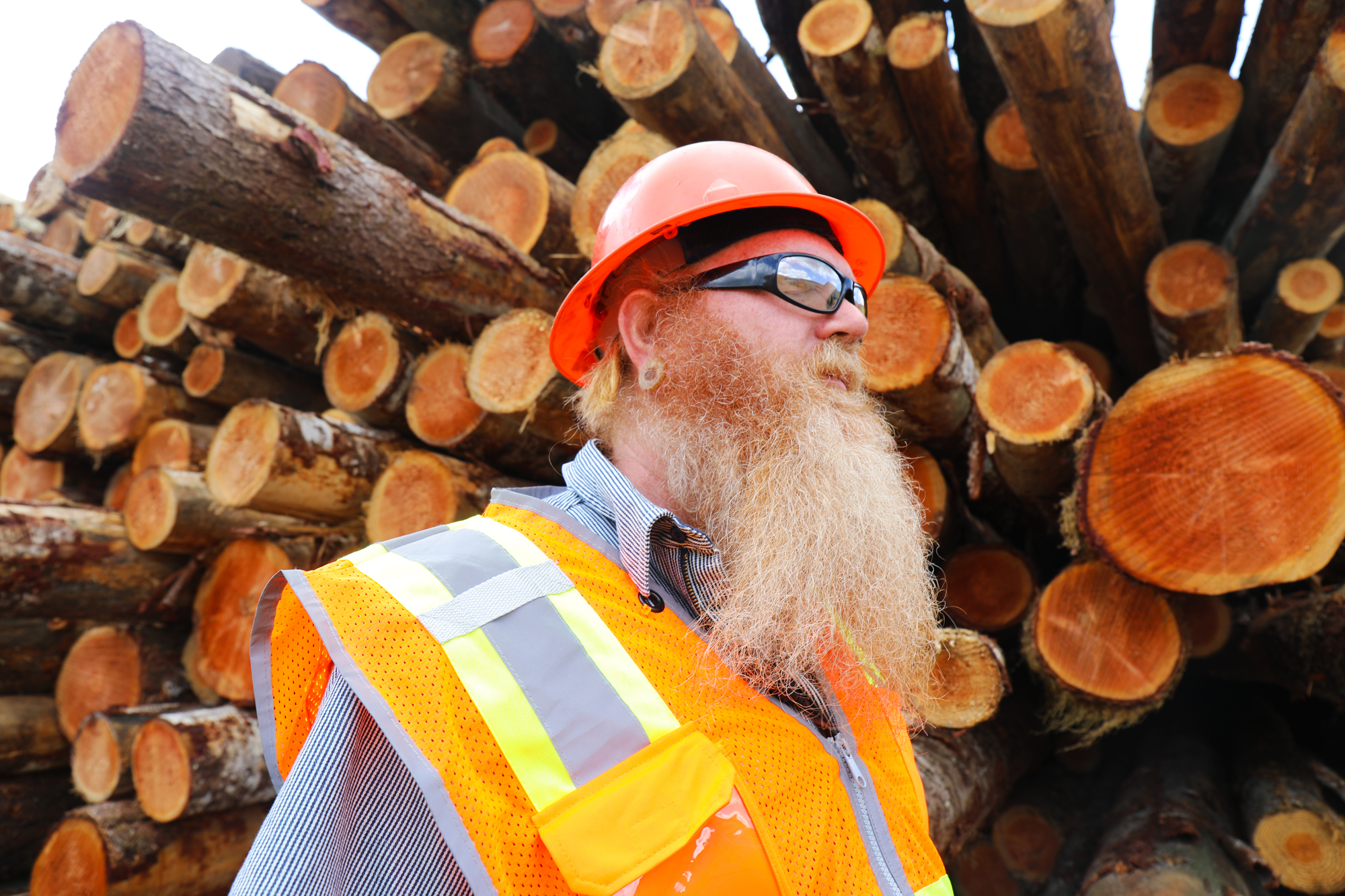