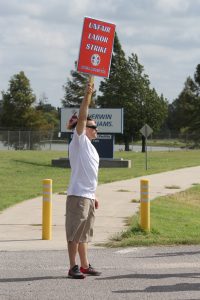 For the first time in nearly half a century, more than ninety machinist union members from Local 708 working at Sherwin Williams in Andover, Kansas have made the arduous decision to demand justice on the job for themselves and all workers by going out on strike. The strike started at midnight on Saturday, September 28 after the group voted to reject the company’s final offer.

“It’s the toughest decision a worker makes to go on strike because it directly affects not only themselves but the welfare of their families,” said IAM Southern Territory General Vice President Rickey Wallace. “But our members at Local 708 have decided they have no choice in order to keep these good, union jobs at Sherwin Williams viable for the next generation. These courageous brothers and sisters of the Machinists Union have the full support of the IAMAW as they walk for fairness.”

The main reasons for the strike were the company’s refusal to three-year agreement, safety issues, wage gaps and a staunch attendance policy among other items. Before this, these members proudly manufactured quality marine and industrial protective coatings used worldwide.

“IAM Local Lodge 708 members working for Sherwin Williams have rejected the company’s offer for the right reasons,” said Chief Negotiator and District 70 Business Representative Tyson Kelly. “The company is not maintaining a safe working environment by continuing to ignore hazardous conditions and forcing employees to work with on-the-job injuries. The employees at this Sherwin Williams facility are fighting for fairness and safer workplace.”

The Machinists Union remains committed to bargaining a fair and safe contract for the workers at Sherwin Williams and are ready and willing to come back to the table when the company is prepared to do the same.

The post Machinists Strike at Sherwin-Williams appeared first on IAMAW .