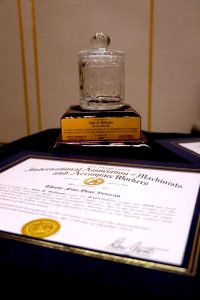 It’s a proud moment for one machinist to be inducted into the Georgia Labor Hall of Fame. So when four IAM members were honored at this year’s ceremony, proud didn’t begin to describe the emotions felt by our union family.

“I am so pleased that four of my union brothers been awarded, by their peers, a spot in the Georgia Labor Hall of Fame,” said IAM’s Southern Territory General Vice President Rickey Wallace. “These IAM members have spent their lives paving the way for Labor in the Peach State. This award honors their legacy and cements their place in history among the working class, as well as the legacy of the Machinists Union. I am very proud to call these men, my brothers.

That evening, before the festivities began, the IAM honored its own with a special Machinist award, making sure these unionists understood the impact they have had on our union and thousands of workers across Georgia. Their work and their words won’t soon be forgotten.

A few memorable moments from the winners’ acceptance speeches:

“It’s good to see our young members here, who are picking up the gauntlet and continuing the fight. We paved the way and I’m so proud they are following in our footsteps.” – Machinist Clint Allen

“Thank you to every person who helped me on this journey. I couldn’t have done it without you.” – Machinist Peter F. Taylor Jr.

“It has been a long journey but It was worth every step of the way. So good to see so many faces I don’t know because it means we are doing the right thing.” – Machinist Alan R. Williams

“My steps are getting slower and shorter but I still have more to do. This award shows me that I’m on the right path.” – Machinist Waymon D. Norwood