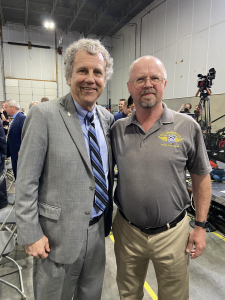 IAM District Lodge 34 Business Representative Donnie Rogers recently got the chance of a lifetime to meet President Biden.  Rogers was invited to attend a speech the president gave discussing his domestic manufacturing policy at the United Performance Metals plant in Hamilton, OH.

“When it came my time, I was introduced as Donnie Rogers from the Machinists Union,” said Rogers. “As President Biden shook my hand, he immediately reminded me the Machinists Union was one of the first to endorse him and how much he supported union members. I told him that we appreciate what he has done so far and will do in the future for our membership.”

The president was joined by U.S. Sens. Sherrod Brown (D-OH) and Rob Portman (R-OH), who are working on the Bipartisan Innovation Act, designed to create more jobs and boost domestic manufacturing. Versions of the bill have passed both the House and Senate, and now, a conference committee will work to resolve any differences.

“Donnie was a well-deserving member to represent the IAM at President Biden’s speech,” said IAM Eastern Territory General Vice President David Sullivan. “The president continues to champion the same pro-union legislation that the Machinists fight for every day. This bipartisan act will help create good, union jobs, ensuring the futures of generations of Machinists.”

“At one point during the President’s speech, he turned and looked at me and made the statement ‘and one more thing, I know how to say the word union,’” added Rogers.