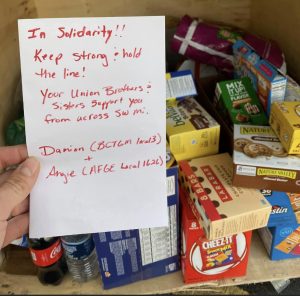 More than 30 IAM members who work at Albion Industries in Michigan are entering their seventh week on strike, over attendance policy, increased mandatory hours and outsourcing language. The strike began September 25 after members of Local 435 voted not to ratify the company’s offer and gave the company seven days notice to terminate a contract extension.

“They have a very lucrative point system for attendance and the company has reduced the number of points for attendance violations,” said IAM District 60 Assistant Directing Business Representative Jeff McLeod. “They used to have four days per year that they could take, if they brought a doctor’s note in, that would excuse them for the day. There would be no attendance violation. The company wanted to reduce it to two.”

Another issue is requiring employees to work 10-hour days instead of the current nine (with one hour overtime) and requiring two Saturday shifts per month instead of asking for volunteers.

“They have plenty of people that volunteer for Saturdays,” according to the bargaining unit, McLeod said. The bargaining unit is comprised of skilled trades workers and assemblers who make specialized, industrial casters that are often custom-engineered.

Community and union support have been strong. A non-union pizza shop delivered pizza and wrote “Keep Fighting” on the inside of the boxes in the early days of the strike.

“They recognized the strike for solidarity,” said McLeod. “It all comes down to solidarity.”

Members of AFGE Local 1626 and BCTGM Local 3 also sent snacks. It isn’t easy being on strike during a pandemic, but the unit isn’t giving up.

“I am so grateful to our membership, the community and every other union for standing strong for good jobs and a fair contract,” said IAM Eastern Territory General Vice President Jimmy Conigliaro Sr. “You have the full support of Fighting Machinists Union members from coast to coast.”

Albion’s parent company is Colson Group , which operates 25 facilities in 15 countries, according to its website. The IAM represents another plant in Jonesboro, AR called the Colson Caster Corporation.