The Next Generation of Giants 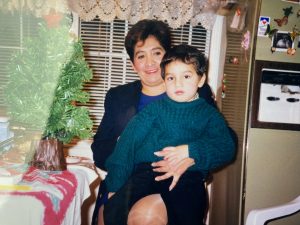 Today’s labor movement doesn’t look like it did in the past, and that’s a good thing. In the IAM’s Western Territory, that was by design when IAM General Vice President Gary R. Allen introduced the GPS plan which became their roadmap for future organizing.

But for it to work, Allen knew he needed to develop activists, specifically younger ones. In labor, we say that we stand on the shoulders of giants. Allen was determined that we would have strong shoulders in the future.

“We have to make room for the future. Union leaders need to hang their egos at the door and let the next generation in,” said Allen. “It’s about keeping the legacy and opportunities available for the ones who will take our places. I plan to keep cultivating young activists with the intent that one day, they will take my job.”

Milton Dueña was union proud before he ever became an IAM member.

“My mom showed me what it meant to have a union in your corner,” said Dueña, an IAM Local 1930 Business Representative Milton. “An immigrant from Ecuador, raising us by herself, she would always say we had a roof over our head, food on the table, and money to pay the bills because of the union.”

He saw how his mother’s job, protected by a United Food and Commercial Workers (UFCW) contract, gave them a quality of life unimaginable in her home country. Therefore, when Dueña starting working for the City of Long Beach at 22-years-old, he remembered his mother’s lessons and signed his IAM card immediately. Today, as Dueña advocates for young workers, he always thinking of his Mama.

“Young people believe in having a union, they just don’t know how and have never been asked. It’s crazy what happens when you educate them,” said Dueña. “That’s where labor comes in.”

Dueña believes we owe everything to those who grew the
movement before him, but now feels it’s his turn.

“An older person talks about seniority and pensions,” said Dueña. “Younger people ask things like, how can you help me with my student debt? How will this help me pay rent? What about mental health insurance? They don’t see the long term vision of having a union and that’s what we need to teach them.” 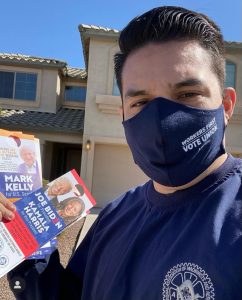 But, there’s also clear advantages to organizing today’s workforce. Take CAUSE, the Central Coast Alliance United for a Sustainable Economy (CAUSE), a non-profit organization the Western Territory recently organized. Their core values already mirror that of the Machinists Union.

“They are young, progressive, activists and educated. They’re already serving the community, one of our cornerstones, and believe in our mission,” explained Dueña. “But some days you have to ask them, while you are advocating for everyone else, who is advocating for you? That’s usually when they want to sign up.”

The Western Territory understand this generation has different issues at stake and they shouldn’t be advocating for them if that’s not clear.

”It’s about empowering them. It’s not about money or wages, it’s showing them they can have power in the workplace with a voice and vote. And how being union also benefits their families and coworkers,” said Dueña. “To me, that hits deep. I think of my mom and how her decision to join a union changed my life. I can make that same change now in other people’s lives.”

For Emily Alapizco, there was no question which path she would take. 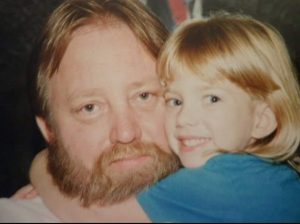 “I am a union brat. My dad retired from Raytheon. My brother works here. I wanted to carry on that tradition,” said IAM Local 933 Recording Secretary Emily Alapizco. ”I stood on the picket line with my dad as a kid. I remember visiting strike lines during the holidays. That’s when the message hit home and I began to understand what having a union card meant.”

Today at 30-years-old, she’s a shop steward and the recording-secretary at her local in Tucson, AZ, policing the current collective bargaining agreement (CBA) and bringing in the next generation of trade unionists. 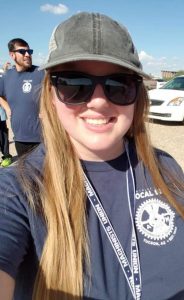 “We need to educate and communicate better if we want to grow. It sounds simple, but it’s not,” said Alapizco. “People my age want different things. Hybrid work for sure, and fair wages because with the internet, everyone can see what others are making. Better mental health care benefits as well, like bereavement for aunts and uncles. Someone just asked if we could look into bereavement in the case of a miscarriage and I said yes because it’s their contract. I don’t think that’s something we have seen in the past.”

But she says, it’s an uphill battle. There’s a lot of misconceptions about unions if you weren’t raised on it. She had some new faces at the last meeting who needed guidance.

“I pulled a new person out of the meeting and explained, this is your meeting as much as it is mine because you are the membership,” said Alapizco. “You have every right to ask questions. Your voice is just as important as anyone else’s.”

That thinking has to be part of every interaction we have. Today’s IAM is a culmination of all industries, walks of life, ethnicities, genders and political ideals, and according to Alapizco, what makes this union family set for the future.

“I was 12-years-old when I got involved and joined my Machinists Union dad on the picket line for the 57-day strike at Boeing in 2008. That’s when being union started for me,” said Diana Noinala, who at the young age of 25, just became the vice president of Local 751F at Boeing in Seattle, WA. “If we want to organize for the future, people need to see a face that looks like theirs.” 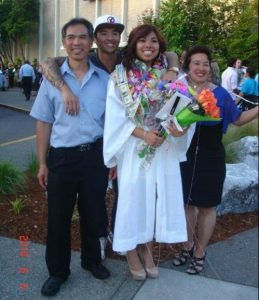 “Diversity matters. I am proudly Asian, young and union. If we want to organize new industries with younger workers, we have to put people in front of them who look like them, can relate, in the same age bracket, and who speak their language,” said Noinala.

Noinala understands this generation has different needs than those in the past. At the table, it will always be about getting IAM members better wages, benefits and working conditions but there’s more to that story for someone younger. Noinala hopes her involvement will bridge the generational gap. 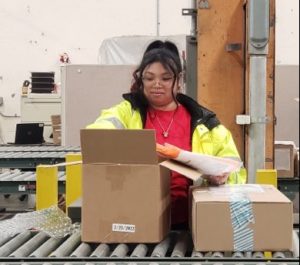 “I am first generation American in my family. My parents immigrated from Laos and Thailand and they told me every day how hard it was there, and the sacrifices they made to come to America. They had nothing but their citizenship and the clothes on their backs. To see them go from that to where they’re now, I’m so proud,” said Noinala. “And a lot of that came from being a Machinist Union member.”

Like so many her age, she now wants to do her part to grow the union and continue the Noinala legacy in the Machinists Union.

“We show up to work everyday to invest in our futures,” said Noinala. “It is just as crucial to do the same for our union.”

In the early 2000s, before most unions even considered the idea, the IAM established a Young Machinists (YM) program to cultivate the next generation of trade unionists. Scott Lacey from IAM Local 63 in Portland, OR, the current conductor-sentinel, was one of the first to sign up, along with his wife and his wife’s sister-in-law. Today, the local like to boasts about its YM alumni. 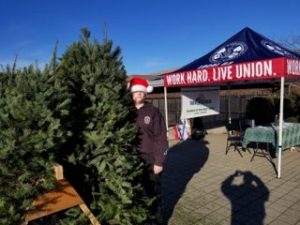 “We all came through the YM program together and today we are all local officers,” said Lacey. “It was successful because the leadership fostered that, pushed us forward and supported our ideas.”

The Machinists Union’s motto of “justice on the job and service to the community” resonates with younger people, and was originally what drew Lacey into the movement. He believes if the IAM can show the world the good it has accomplished, this union will be around for another 134 years.

“Honestly, I have no gain here except that it makes me feel good to help others,” said Lacey. “This is about doing the right thing. With the leadership in my corner, I have another tool to be able to do even more.”

IAM Local 63 has always taken community service to heart. From selling Christmas trees to raising money for nearly 800
foster kids last year, the IAM affords Lacey the opportunity to make a difference. But all of this was spearheaded by the YM program. Whether it’s in the shop or on Main Street, Lacey believes every local should be lifting up the generation who will take over.

“Not only am I proud, but I have backing from my union family who want to do the same thing. I am damn proud of that,” said Lacey.”

And he’s making sure to raise his two little ones to be union proud as well.

“They go to meetings, they sell Christmas trees, everything,” Lacey said with a laugh. “You would be shocked to see how many tress you can sell with a little blond hair, blue eyed girl helping.”

Newly-elected President and Directing Business Representative (PBDR) Ashley Long of IAM Local 794 in New Mexico loves when someone assumes that at 30- years-old, she must be the youngest PDBR in her local’s history. 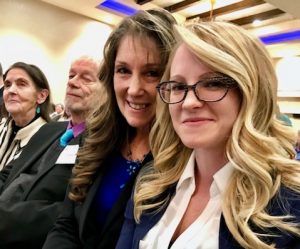 She laughs and says, “That would be great but GVP Allen beat me. He was just 24 when he led this local. It’s a testament to Allen’s support for young trade unionists. He knows, leadership starts at the top.

“GVP Allen gets it. He not only supports the young activists in our territory, but he lifts them up and mentors them along the way,” said Long. “They quickly learn they should be at the table and be involved.”

Like so many young machinists, Long’s story starts at home. Raised by two union educators, she has righteousness running through her veins.

“We had a really terrible governor who turned the education system on its head in New Mexico and I watched my parents live that every day,” said Long. “In that moment, it clicked for me. I knew I had to be part of changing that.”

All it took was a trip to the state capitol with her father and she was sold. After a few years at another union and a stint at New Mexico’s State Federation of Labor, Long found a home at the IAM. Her understanding of policy is changing how the territory organizes, working to change laws that hurt workers.

“When our team went to GVP Allen and said we have to run this bill and change the law, he agreed immediately and asked how can we help,” remembered Long. “The fact that he trusted a young unionist with the huge responsibility of running a piece of legislation through the process says everything about the western territory leadership.”

Today’s labor game is changing. Organizing campaigns at companies like Starbucks and Amazon are becoming critical turning points for the labor movement. The workforces are young, diverse, passionate and ready to fight for justice and
fairness; the epitome of what it means to be a trade unionist. 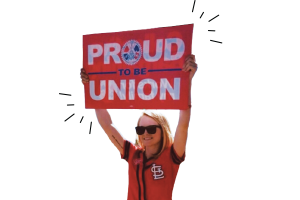 “Speaking to some young unionists recently, I told them that one of them would be GVP one day and take my position and another would be a future IAM International President,” said Allen. “That’s how we should be thinking – that we are only here to make room for the future. And from what I’ve seen, the labor movement is in good hands, and future generations will be standing on the shoulders of giants once again.”

The post The Next Generation of Giants appeared first on IAMAW .