The Watchmen of the IAM 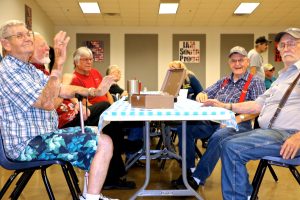 Regardless of your age, you are greeted the minute you walk into the retiree meeting at district 776, usually with a piece of cake. The sweets are just a bonus; it’s the people in this room who draw you in.

“I am so proud that this group allows me to be their president. People I looked up to my entire career, who helped me,” says Denise Maben, who initiated into the IAM into local 776A in 1979 and now heads the district’s retiree club in Fort Worth, TX. “I just want to take care of them now and do right by them because they did right by us for so many years.”

For Denise, this is not a hobby or something to kill time in her golden years. After decades of fighting the good fight, this is her union life today. Her Father O.D. Wright, a legend in these parts, led this retiree club for a quarter of a century until he celebrated his 90th birthday and decided it was time to step down. While he was looking after the most senior machinist members at home, Denise spent decades in the field doing the same. Taking cues from her Dad on how to live her life, she led by her gut and her heart.

“Back then we were fighting so hard. We were so mad all the time. We ate it, we drank it, we slept it and it was a 24-hour thing,” Denise remembers about the decades she spent jousting for workers’ rights.

Hired into Lockheed Martin in February 1979 as a Deburr Operator, her years on the shop floor were not easy as a woman in the 1970s. But she knew she was exactly where she was supposed to be.

“I’ll tell you, the first time I walked in and the floors were vibrating and the walls were vibrating and you couldn’t hear anything but machinery – I really thought I had died and gone to heaven. I thought this is where I want to be,” Denise recalls, smiling as she reminisces.

But she’ll tell you, it wasn’t all ‘sunshine and roses.’ 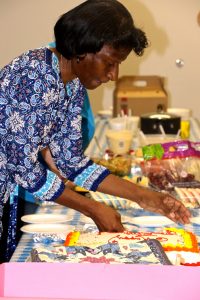 “We, the cute women, were put on the aisle, in full display, and my desk was on the front aisle, they would bring all the visitors by,” explain Denise with a raised eyebrow. “It was ridiculous.”

She was clearly not a fan but it triggered a desire to make changes for workers, and in essence, a long union career.  Elected as the Recording Secretary of Local 776A, the largest local in Texas at the time with nearly 8000 members, Denise held the position for three terms. And from there, she pretty much filled any union position that was available. As long as she was helping workers and their families, she was alright.

“There were so many times I was proud to be a machinist. The ’84 strike stands out for sure,” remembers Denise.

That’s not surprising because that fight took nearly 8000 IAM members from Lockheed Martin to the streets, striking for everything from better wages to benefits that mattered.

“Then the National Guard comes. You could hear them trotting down the street. 200 of them, coming from the National Guard office around the corner. And they showed up in full riot gear and surrounded us and then they started hosing us down and tear gassing us,” remembers Denise vividly. “But we stood strong, together, and by the time we got through, we had the best contract in Aerospace.”

It’s experiences and actions like these that define the legacy of the Fighting Machinists. The working men and women who fought back in the day for the rights we have today.

“The grievances we won. The changes we made. We tried to make it better for the next generation. We tried really hard,” said Denise.

The retirees in this room prove that they did just that, but they are also the first to tell you that the job is far from over.

That’s the general consensus in the room as everything from politics and health updates to recipes and presidential candidates are discussed in just one meeting. This is the power of the not just this retiree club, but all of the senior groups spread across the IAM. These are the men and women who are experts in all things ‘Union.’

“We have already done our fighting. We really don’t need to fighting much anymore because they know who we are. And there’s power in that,” says Denise with a sly smile and a big laugh. “There’s not much I need to set on fire anymore.”

Denise is a prime example of the why the retirees of the Machinists Union are the Watchmen of not just the IAM’s legacy, but also its future. And the reason we need to always carry on their fight, passion and love for this Union.

“I want to thank Sister Maben for everything she has done for our members and retirees,” said IAM International President Robert Martinez Jr. “Her dedication and commitment is as strong today as when I met her on the shop floor in 1980. Denise truly is a great friend and a true Fighting Machinist. I look forward to continuing to stand shoulder to shoulder with her and her entire family.”

The post The Watchmen of the IAM appeared first on IAMAW .