Below you will find the most recent outreach from IAMAW International President Robert Martinez Jr. to US President Donald Trump regarding contract negotiations. 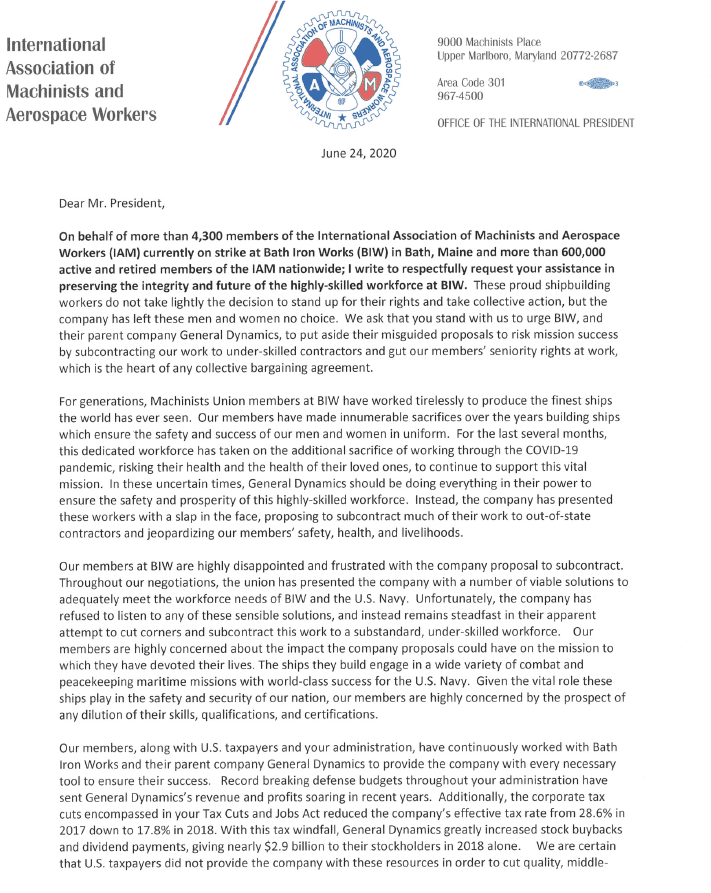 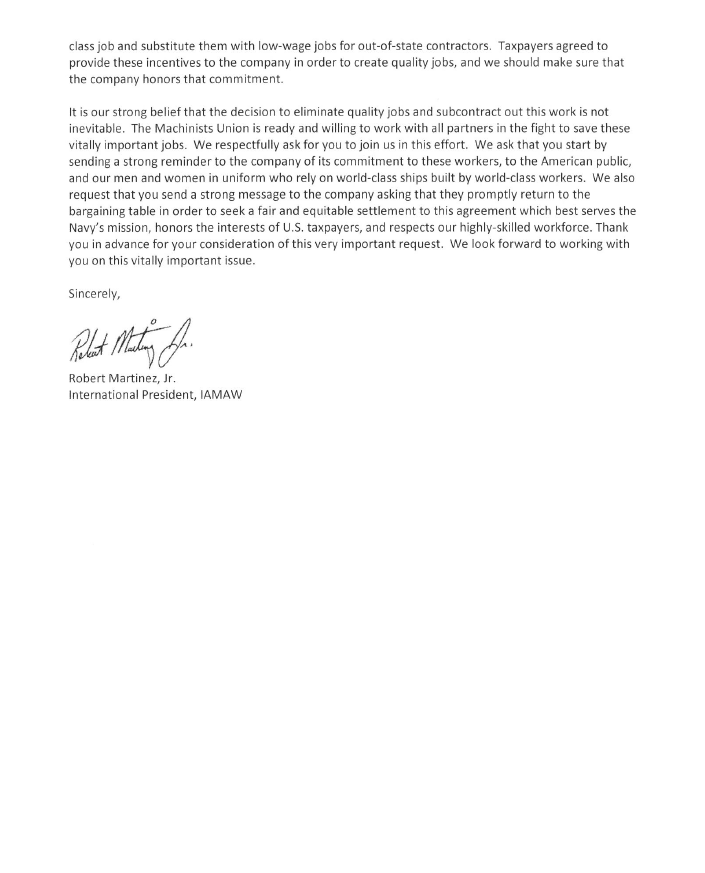 Below you will find the most recent correspondence between IAMAW International President Robert Martinez Jr. and GD Chairman and Chief Executive Officer Phebe N. Novakovic regarding contract negotiations. 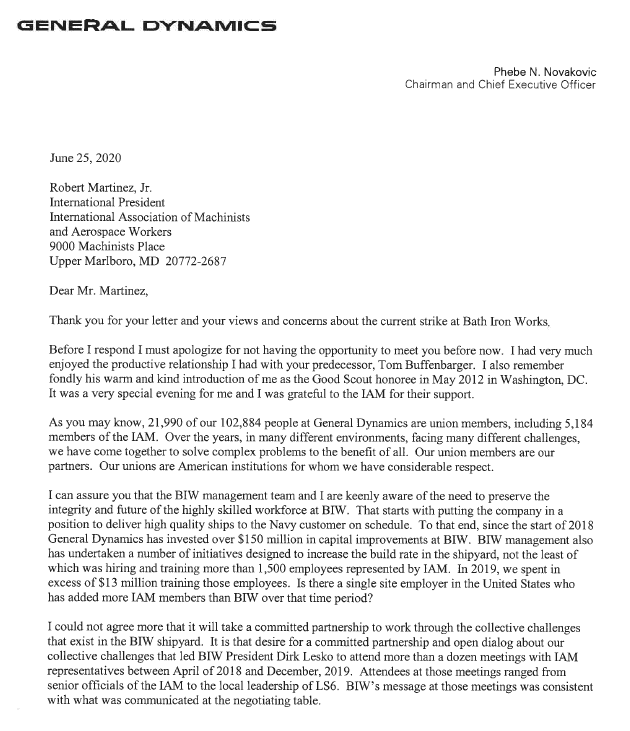 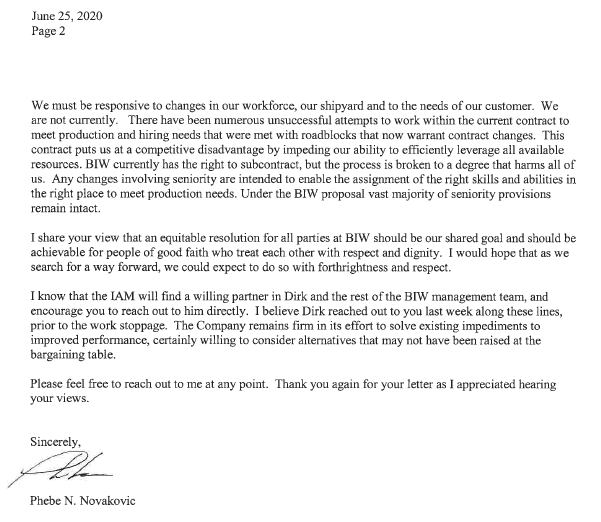 IAM Local S6’s strike at Bath Iron Works’ (BIW) shipbuilding facility in Maine continues to build support in the Machinists Union’s effort to get a fair labor contract that stops the company from expanding the outsourcing of good jobs and protects worker seniority.

“A job is about a lot more than a paycheck. It’s about dignity. I urge Bath Iron Works to come back to the table and make a fair offer to the hardworking men and women of IAM Local S6,” Biden said.

Maine AFL-CIO President Cynthia Phinney urged the shipbuilder’s management to “go back to the bargaining table and negotiate a fair contract.”

“BIW proposals roll back job quality, worker protections and safety,” said Phinney. “That’s why workers overwhelmingly rejected this contract. All over this state and country the essential people are rising up to demand respect, justice and a fair share of the wealth we create.”

Bath Iron Works, a subsidiary of General Dynamics, has refused to put aside its misguided proposals to subcontract work without addressing the root causes of workforce shortages at the shipyard, despite the IAM presenting numerous viable solutions to meet the needs of the company and the U.S. Navy.

The more than 4,300 IAM-represented workers walked off the job and started picketing after voting down the company’s “last, best and final offer” on Sunday, June 21.

Williams, a long-time IAM labor leader in Texas, is the first Black president of the Texas State Council of Machinists. He is a well-known human rights activist.

Williams drew the historical line on injustices stretching from Emmett Till in the 1960s to the present day and George Floyd.

“The Machinists Union and the North Alabama Labor Council stands with you,” said Williams. “Our foundation of democracy has a long way to go to reflect the creed of this nation. We are seeing people of all races marching and speaking up, speaking out for a better today, a better tomorrow and for a better world, demanding that justice finally be done.”

“The Labor Movement has always been the great equalizer, allowing every working man and woman to have a voice and vote regardless of race, sex, religion or age,” said IAM Southern Territory General Vice President Rickey Wallace. “It’s the foundation of who we are and it directs our conscience as we fight for justice in the workplace and in our communities. By working together, standing in solidarity on the right side of history, we can and will change the world.”

Brother Williams and his wife traveled over 700 miles to speak at the rally.

Before the rally, the Valley Labor Report, on WVNN (Athens, AL) interviewed Williams. Jacob Morrison and David Story host the show live both on the radio and on the internet. It’s the only labor radio show in Alabama. Story is the President of Local 44 in Decatur, AL.

Watch the replay of the show.

The IAM has regretfully learned of the passing of William W. Winpisinger Education Center employee Marvin Banks. Brother Banks worked for the IAM for nearly 12 years and served as the overnight security guard at the school.

A memorial ceremony was held Thursday, June 25 in the Workers’ Memorial Garden at the William W. Winpisinger Education and Technology Center in Hollywood, MD.

“The Winpisinger Center was a better place – and better reflected the values that define us as an organization – because of Marvin’s presence and his work,” said International President Robert Martinez Jr. “Marvin treated every member-participant and his co-workers with respect. He did so much, for so many, for so long—and never asked for anything in return. Marvin was a true trade unionist. We will miss him.”

“Marvin worked as a security guard here at the Winpisinger Center – in that role it is true that Marvin ensured the safety of the members who attended programs here and made sure the campus and all its buildings were secure,” said William W. Winpisinger Center Director Chris Wagoner. “But in reality the job title in no way captures the many hats Marvin wore or the personal qualities that he possessed that allowed him to excel at his job. It was an honor to know and work alongside him.”

A visitation will be held from 11 a.m. to noon on Monday, June 29, 2020, at the Briscoe-Tonic Funeral Home located at 38576 Brett Way, Mechanicsville, MD 20659. The funeral service will immediately follow the visitation.